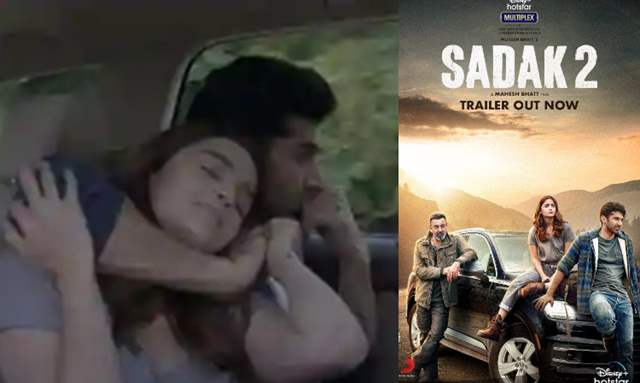 Mahesh Bhatt directorial Sadak 2 trailer was released yesterday, and it has been receiving a huge backlash from the audience. The trailer turned out to be one of the most disliked trailers in Bollywood. Amid all the troubles, the film might still have an infinitesimal chance to do fairly after its release.

However, the problems do not seem to end for this Alia Bhatt, Pooja Bhatt, Aditya Roy Kapur, Sanjay Dutt starrer as the film has once again landed in trouble after a Pakistani Music producer -  Shezan Saleem aka JO-G alleged that the song Ishq Kamaal which plays in the trailer is copied from a Pakistani song.

The producer took to his Twitter handle and climbed that the song in the Sadak 2 trailer sounds like a 2011 composition by him. He pointed out the same in his Tweet and shared the similarities in the video uploaded by him and has brought it to the attention of Fox Star Studios.

What do we do about this. Copied from a song that I produced in Pakistan and launched in 2011.

In the attached video he is heard saying, “A trailer for a Bollywood movie called Sadak 2 has just been released, and there is a song in it called Ishq Kamaal,” as he called out the film. He continued, “After listening to it, I realised that it sounds like a composition I had produced for a friend around 11 years ago. The friend’s name is Zaid Khan. I think they’ve copied it because not only the melody, but the music is also very similar.”

After playing the choruses of both songs, he concluded by asking, “What does the public have to say?”

Previously, Pooja Bhatt claimed that Sadak 2 will introduce fresh music talent. She even claimed that the song Ishq Kamaal is attributed to a ‘music teacher from Chandigarh’, who came knocking on their door. Taking to her social media handle she wrote, “Even #Sadak2 gives birth to a brand new talent in the form of @Suniljeet72 A music teacher from Chandigarh who came to our office with no prior appointment,a dream,a harmonium & a brilliant song called ‘Ishq Kamaal’ that was absorbed into the film on first hearing by my father.”

Meanwhile, Fox Star Studios is yet to react about the same and no official statement has been issued from the studio. The film has time and time again subjected to controversies even before its release.

For the uninitiated, Sadak 2 marks the first collaboration of filmmaker Mahesh Bhatt with his younger daughter Alia Bhatt. The trailer of the upcoming film was released on Wednesday and fans seem disappointed considering the backlash it has been receiving. The trailer has received 4.5 million ‘dislikes’ on Youtube with a massively unfavorable ‘like-dislike’ ratio.

Check out the Sadak 2 Trailer below: