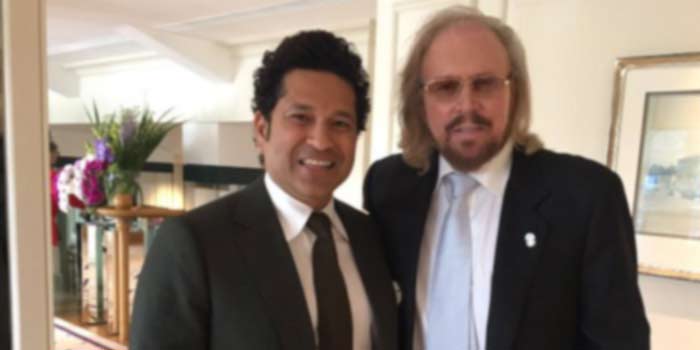 Legendary cricketer Sachin Tendulkar got nostalgic about his past when he got to meet Bee Gees star Barry Gibb.

Sachin took to Twitter on Sunday to share a photograph of himself with Gibb, in which the two can be seen posing together while in formals.

"I was only four years old when 'Stayin' alive' released. Barry Gibb your songs have always struck a chord with me," Sachin captioned the image.

Gibb is the last remaining member of Bee Gees, which he formed with his brothers Robin and Maurice in the 1960s. They gave hit songs like "Stayin' alive", "How deep is your love" and "Tragedy".

Maurice passed away in 2003 at the age of 53, following complications with a twisted intestine.

Robin, Maurice's twin, died in 2012 at the age of 62 after battling cancer for several years. The family lost another brother, Andy, who had battled drug addiction, in 1988.

'Tujhse Hai Raabta' to take a Leap; Checkout their Post Leap ...
11 minutes ago

Karan Johar’s Takht put on Hold; Plans for another film ...
24 minutes ago

Kartik and Naira to Separate AGAIN in Yeh Rishta Kya Khelata ...
32 minutes ago

Namish Taneja all set to feature in 'Aye Mere Humsafar' as ...
47 minutes ago

Kareena has the Sweetest wish for Sara Ali Khan on her ...
58 minutes ago