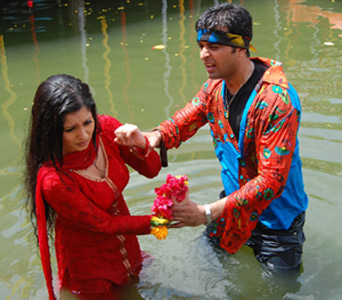 Featured Video
Sachin Shroff will play the male protagonist, Saurav, who is completely in love with Rudra (Payal Sarkarr). He is a ruffian but an immensely lovable character. In his sheer desperation to woo Rudra, he invariably ends up making a fool of himself. For instance, in the scene where he first sees Rudra, he thinks she is drowning, so he jumps in to save her but realizes the water is barely knee deep.

Speaking about his role, Sachin says, “It’s a completely different character and I have not tried my hand at something like this. He is a typical tapori guy. In fact, I would say he bears a lot of resemblance to Aamir Khan’s character in Rangeela.”

Rumours were also abuzz that Sachin was planning on doing Zee’s upcoming reality show, but when asked he rubbished them saying, “No, I am not taking up the reality show. I was pretty busy with Naginn and now with Waqt, my hands are full at the moment with these two soaps.”

We sure hope Waqt rings in some good times for Sachin!!

14 years ago wat kind of uncle is he? exposing his own niece? goshhhhhhhhh

+ 5
14 years ago He will look cute with Payal; cant wait to see him as a tapori.

Dnivara 14 years ago Hi super star wass up!Baiya My name is aravind [email protected] Ramuk which is requesting as a brother.I always won't miss ur Serial-Sinndoor tere naam ka on Zee.ItZ really give me speech.bye c u baiya!.