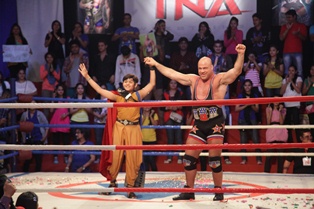 Indian Television's most adored superhero Baal Veer' is all set to face the biggest challenge in his life. The super hero, who has captured the hearts of millions of kids across India, is now gearing up to battle it out in the wrestling ring with none other than the super wrestler 'Kurt Angle'.

The two super heroes who are famous and well accepted by the audience in their specific genre's will face-off each other in a special episode of 'Baal Veer'.

In turn of events, Dadaji accidently drinks a power tonic and is confident to face Kurt Angle. He ends up signing an agreement for a wrestling match with the International wrestler. But, soon he realizes that the power of the tonic is for limited period and ends up being thrown out of the wrestling wring. That's when Baalveer faces Kurt Angle for a wrestling match.

Speaking about the track, Mr. Anooj Kapoor, EVP & Business Head, SAB TV says, "Baal Veer is India's no. one kids show and hugely popular amongst the kids.  On the other hand, Kurt Angle is popular amongst kids particularly in India. We wanted to offer our young viewers the best of both the worlds and what better way than a face-off between two of their favorite Super Heroes!"

Dev Joshi, who portrays the character of Baal Veer said, "Portraying the character of a Superhero it gives me immense courage and excitement to face Kurt Angle. I have seen his fights and I am quite fascinated with his fighting style and I am a huge fan of him. All the kids will be excited to watch this face off. I hope, I do not discourage my fans and I am eagerly waiting for the sequence to happen."

It will be an interesting and an entertaining combat, where the skills and powers of two superheroes will clatter. Who will win the battle ...watch Baal Veer to know what happens next.

+ 4
10 years ago Happy birthday Hrithik...He's a wonderful actor that looks for doing challenging roles then doing MORE roles for MORE money lol....I don't want to name those actors that do that but there are some! But am gald Krrish sequel is coming out and that too with Priyanka (Hate it when they change the main lead actress in sequels)

+ 4
10 years ago Although my knees heart a bit more than they used to,' said Hrithik.


someone should check grammar mistake b4 posting this... am sure H meant his knees still hurts not heart ..uff... sorry bt zat was buggin me lolzz...

glad to hear it.. cnt wait for the sequel...

+ 5
10 years ago HRITHIK AND PRIYANKA AGAIN TOGETHER!!!! yayayaayy!!!!! my two favvvvvvvvvvvvvvvvvv im soo excited!!! thanks for sharing!

+ 8
10 years ago . Although my knees heart a bit more than they used to,' said Hrithik.


error in the article, its shuld be knees hurt isn't it..