SAB, India's leading family entertainment comedy channel in keeping with its brand promise of 'Asli Mazaa Sab Ke Saath Aata Hai' and is all set to announce yet another path breaking initiative 'SAB Ka Mela', a first-of-its kind fun and entertainment Mela spread over a period of 5 days from May 05 to May 09, 2010. 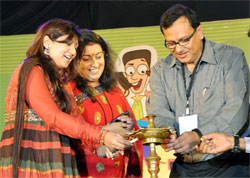 SAB Ka Mela, slated to kick start in an extravagant style on May 5th, will have a mixture of attractions like games, rides, contests, stalls, art and culture shops, traditional folk dance and song performances. Artists from SAB shows will visit the 'SAB Ka Mela' to enjoy the festivity and reach out to their fans and audiences.

According to our source, "Two big stars of SAB TV, Smriti Irani aka Maniben and Juhi Parmar, protagonist of Yeh Chanda Kanoon Hai inaugurated the Mela today amidst a lot of fanfare".

Commenting on the initiative Mr. Anooj Kapoor, Business Head, SAB said, "SAB KA Mela brings to ground, our brand proposition of 'Asli Mazaa Sab Ke Saath Aata Hai'. It is a unique engagement platform wherein our viewers, now million of happy families would get to meet the artists from various SAB shows. We are also bringing to life the culture and art form of each city that we go to."

Adding further he said that, "SAB TV plans to take this activation further to 15 cities across India to connect with its growing audience base."

So come along and have fun with your family -Kyunki Asli Mazaa Sab Ke Saath Aata Hai.

jayesh.r.shah 10 years ago we love u juhi.plzzzz come with new show

Ishan. 10 years ago Why was Disha Vakani left out ?? Even Disha is a gr8 actress and moreover she is acting in the no. 1 show on SAB TV and she is the only one who promotes Ahmedabad in every episode of TMKOC . Very bad , she should have been given a chance to inaugurate !!

*Devanshi* 10 years ago Wish i was in my city, missed the chance.. Grrr

Delnaaz Irani speaks about entering Choti Sarrdarrni, her ...
34 minutes ago

Madhrima Tulli & Ssharad Malhotra starrer “Pasta” gets an ...
53 minutes ago