STAR Plus is all set once again to give its viewers a reason to celebrate. The shows Kumkum and Saarthi will be seen in a cross over episode with the entire cast celebrating success together. This 2 hour special episode will be telecasted on the 11th of January. The high point in Kumkum will be unfolded where the suspense of Antara's murderer will be revealed, whereas Zalak Thakkar the main lead protagonist of Saarthi will be getting married to Gurpreet Singh which will be shot on a lavish scale.

Sachin Deo is directing the crossover episode and producer Asit Modi of Saarthi is giving personal attention to all aspects to make the episode look grander in every way. There will be exclusive performances by Roshni Chopra, Hussain and Juhi Parmar of Kumkum, Yash Tonk and Pallavi Subash of Karam Apna Apna and Vishal Singh-Kanchi Kaul of Bhabhi.The dance performances have been cohreographed by Seemaa Desai and Pappu Khanna.

But that's not all… There are much more suprises stored for the day. This will include a stunning performance by the two sisters of Bidaai – Ragini & Sadhna.

This cross over episode will also be remembered for the fire accident that took place recently, as a result of which the production house had to bear the loss of rich and grandeour costumes getting destroyed. Hats off to Producer Asit Modi who managed to put up the grand set all over again after the tragic accident.. 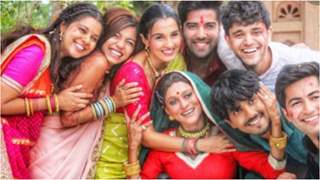 great pics of all

looking foward to the episode

but wished they had revealed the murderer today

why drag it more

14 years ago just finished watching it....and it was grand for sure......it was looking like a royal wedding