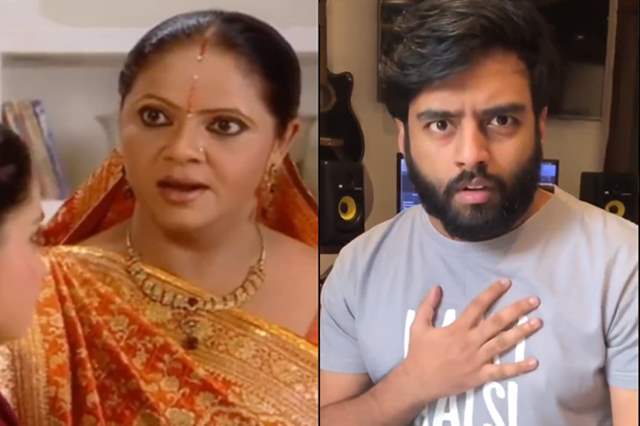 One such thing happened recently where for the past two days, a clip from musician Yashraj Mukhate has taken the internet by storm. You may have already seen the clip but just in case you haven't, take a look-

This brilliantly done mashup of just some dialogue mouthed by actor Rupal Patel aka Kokilaben in the longrunner, Saath Nibhana Saathiya is indeed absolutely worthy of reaching the maximum people. Guess what? Now, the person featuring in it, Patel herself has gone to react to it in an interview with Bombay Times.

Memes and parodies are literally a part and parcel of the internet world and instead of being offended by the same, Patel took it in great stride and even went on to personally contact Mukhate congratulating and applauding him for this effort.

Talking about the character first, Patel said, “Kokila was the role of a lifetime, and I have the deepest gratitude for the show’s makers and the channel. There is a moment, an incident or a character in an artiste’s life, that becomes a milestone. Kokila is that for me. It’s such a lively character. People appreciate it for various things — her voice, authority, look and the way she balanced her two bahus, who were as different as chalk and cheese. She is your ideal saas. The show and the characters’ simplicity is what connected with viewers.”

She is not on any social media platforms and hence this video was sent to her where she said, "“My sister-in-law sent me a message about it. Later my co-actor, Rhea Sharma sent me the rap. My immediate reaction was surprise and shock. I was perplexed about how Yashraj got this clip since I never sang on the show. Later, I realised that it’s a rap and he has used my dialogues for it (laughs!). I liked it so much that I asked a few friends for his number. I spoke to him and expressed my gratitude. I am humbled and grateful for Smriti (Irani) madam for liking it. I am not on any social media platforms as I don’t want to be distracted when I am working. On the set, my world is the screenplay and the show. I reach before time and ask for the screenplay for the day. I even memorise my co-actors’ dialogues to know their cue. If I am not involved in a scene, how will I convince my audience with my portrayal of it?”

Talking about never being offended by any memes or other things, she said, “A viewer expresses his appreciation in different ways. It could be a funny response, too. Why should I feel offended? That’s one of the ways to express your love, too. I always go by the intent behind the response. Aur mujhe woh kabhi galat nahi laga. The character has made a mark on people’s minds and hence, they remember it to date. In fact, a lady would impersonate me on a video-sharing social networking service. I found it very funny. I don’t mind that at all, as I know intent is not to harm or offend anyone. Neeyat par sab kuchh nirbhar karta hai. Only prominent characters or personalities become a subject of memes or caricatures, and I am proud that Kokilaben is one of them. A true artiste should not have any ego. Main mitti ka patra hoon jo kisi bhi character mein fit ho jaaye. Ek artiste tab tak zinda hai jab tak uske kaan mein taaliyon ki goonj padhti rahegi. Phir chahe woh comedy ke zariye ho ya kisi aur emotion ke.”