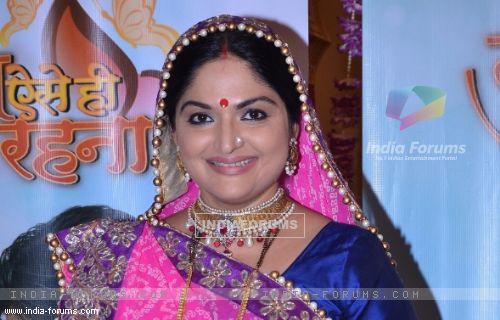 Versatile actress Indira Krishnan, who has showcased her acting skills in many shows and popularly known for her character in Sony TV's Krishnaben Khakhrawal, is now seen playing the character of Rukmimi in Rashmi Sharma Telefilms' newly launched show Tum Aise Hi Rehna on Sony TV.

We spoke to Indira to know more about her character in the show.

Talking about her character and storyline of the show, she told TellyBuzz, "It's an authentic traditional Rajasthani family's story. The characters in the show are very much positive. My character Rukmini, is looking for a perfect girl for her younger son Abhimanyu (Kinshuk Mahajan). She wants her daughter in law to be very simple who should be well versed with all the rituals and traditions of the family. Rukmini wants her daughter in law to be just like her and she won't like her to be a working girl but Riya will end up being her daughter in law who is a working girl. So, the story will revolve around whether Rukmini will accept her or not and will she allow her to work or not. Rukmini is positive but circumstances will bring about a change in her character. It's a sweet story to which persons of all age groups will relate to."

Though Indira has been a part of many popular shows in which she has played pivotal roles but she made a mark with her character in Krishnaben Khakhrawala which is close to her heart as well. She shares, "Krishnaben has been a memorable show for me and it will always be close to my heart."

Further she adds, "I am attached to Rashmi very much. I have earlier worked with Rashmi in Rehna Hai Teri Palkon ki Chaaon Mein. It was a lovely show and it was always my wish to work with her again. She defines a character well and makes them strong. Rukmini is as strong as my character Krishnaben. Krishnaben was a woman of today's era and Rukmini is a very strong, strict and disciplined character. She is positive and takes care of her family well."

We also quizzed Indira about her rapport with her mother in law in her family. She said, "Dadi is very bubbly and she guides Rukmini. There is a difference of opinion between dadi and Rukmini but Rukmini takes decision on her own but she respects dadi a lot."

We asked Rukmini that what does she likes the most about the show. She says, "I liked my dressing. I was wearing very simple sarees in Krishnaben. I used to wear simple cotton sarees and had no makeup. Rashmiji has taken care of my jewellery and outfits to look the costumes rich."

6 years ago loving u so much KINSHUK MAHAJAN as Abhimanyu.

+ 3
6 years ago Waiting for your scenes Kinshuk along with Indira Krishnan...once you tell the family...
Will it be that soon?

All the best to all of you!

Indira Krishnan ..loved you as Gangs in AB!...Good to see you playing Kinshuk's mom again. Best of luck!

+ 3
6 years ago I am loving ur chemistry with KINSHUK MAHAJAN after AB .

6 years ago You are being so stern with Abhi and his phone scenes are hilarious.. keep up the good work Indira !!!

+ 3
6 years ago Good to see you once again as Kinshuk's mother...Indira Krishnan

All the best to you and your show!

6 years ago Glad to see you back Indira, you look really nice and different from AB days..Nice that you are KINSHUK MAHAJAN's mom again..

6 years ago KINSHUK MAHAJAN u r rocking as Abhimanyu,way to go TAHR.