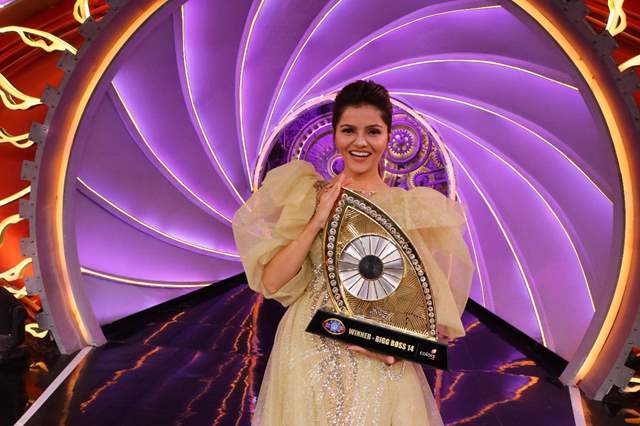 Bigg Boss 14 winner Rubina Dilaik has been constantly making news even days after lifting the trophy. While she has been having a fun but busy time while out of the house, we recently got in touch with her, where she spoke about everything Bigg Boss, Abhinav Shukla, and more.

A lot has been said about the actress revealing her secret regarding the divorce with Abhinav Shukla inside the house. Ask her if she was hesitant about revealing the secret, and the reaction that followed, she says, ''If the people in the house thought it was strategy, it is very sad, and I did not feel any such thing about any contestant who revealed their secrets because you are so vulnerable, you have been wanting to share something that is so close to your heart, it cannot be a strategy. My intention behind it was that this was the intention behind us doing Bigg Boss and if we cannot express it on the show, then we are being dishonest to ourselves in a way. If you have fears or apprehensions about sharing such a thing on a reality show which you entered with a certain intention, and you feel it is a good or bad strategy, it is not about that. The intention was how honestly can I bring this journey before everyone with courage, and what people think about it, and give it a different name, I won't be perturbed by it.''

Everyone has been waiting to officially hear about the re-marriage. Talking about the same, she said, ''Marriage is going to happen of course, and once I find time from media interactions, we will discuss it. We get very little time now as even he has personal commitments and when we speak, there is a little spark of conversation where we are wanting to plan this again. We haven't reached a point to full fledged plan it, but soon, we are going to do it.''

Rubina has always maintained that going together will have its pros and cons. Ask her how right or wrong was this decision to go inside the house together, she said, ''Definitely, the decision to go inside the house together was very right and useful and we don't have any regrets about it, neither is there any rethinking that. Honestly, I feel that there are more cons than there are pros because you are taking a relationship that is at such a delicate phase inside the house and you are not only tied up yourself, but you also have the fear that nothing bad happens between the two of us, so it always sued to be a heavy thing on us. Imagine the mental state where not only are we living our journey, but we are also trying our best to not let our relationship get affected.''

Meanwhile, Rubina has been constantly sharing photos and videos on her social media and has fans gushing over her to date.

1 months ago Here come the low life Rahul fans... get a LIFE