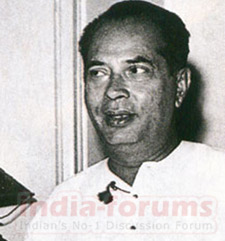 Roy started his career in films as a camera assistant and went on to become an assistant director for directors like P. C. Barua. He had a unique understanding of emotions, especially of the downtrodden people.

Though all of his films were a class apart, the closest to his heart was Devdas (1955). The Dilip Kumar-starrer tragic saga, based on the novel of the same name by famous Bengali novelist Sharat Chandra Chattopadhyay, has since been remade by several directors, the latest by Sanjay Leela Bhansali.

The retrospective on Roy in the Italian film festival will showcase most of his classics. Festival director-founder Selvaggia Velo says the motto of the event is to promote films like those by Roy in Europe and Italy. Besides Indian films, the festival also features movies from Bangladesh, Pakistan, Nepal and Sri Lanka. Short films and documentaries will be also screened along with feature films. The best film in each category chosen by the audience will be awarded the "River to River DigiChannel Audience Award". The festival is still accepting entries.