For the third time, the host of Comedy Circus 3 – Teen Ka Tadka has been replaced!! 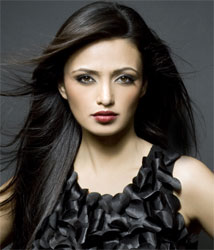 Featured Video
Earlier, it was Kanchi Kaul who was replaced by the charming Mouni Roy as host for this season. But now, it looks like dates did not work out with Mouni, and she has been replaced by Roshni Chopra as host.

According to our source, "There were some last minute date shifts that were made in the shoot of Teen Ka Tadka. Since Mouni had prior commitments, she had no other option but to opt out of the show. Purbhi Joshi was also approached to host the show, but she is presently busy with films".

Mouni Roy confirms the news and said, "I am really unhappy that I had to move out of the show. But the production house came up with some schedule changes which clashed with my commitments. So I had to move on".

The new host of the show Roshni Chopra is delighted with this development. "I was earlier part of Comedy Circus 20-20, and this is a privilege for me to host Teen Ka Tadka. I am really enjoying my stint as host".

Roshni has already shot for two episodes, and will be seen hosting the show from this Saturday.

+ 2
13 years ago it's a good choice...even though i like mouni as an actor she wasn't good as an anhor...no offense...and roshni is an awesome anchor.

13 years ago Thank god!!
Mouni was never a good choice, no offence meant but she just didn't fit there.....
Shruti seth n Purbi have set such high standards, both were wonderful as hosts.Hope Roshni fits in those shoes....Good luck to her

+ 3
13 years ago mouni wasnt that good at hosting. it looked like she was just reading her lines... roshini seems like a good host

13 years ago i totally agree with chahat4u, shruti was the best host...... but i think she'll also do a great job :P:P:P

+ 4
13 years ago shruti was d best host. but i think rishni wld be better than Mouni.

+ 6
13 years ago yeah...! roshni is hosting... mouni wasnt tt good.. but i wil,l still prefer shruti anytime over anyone else as the host