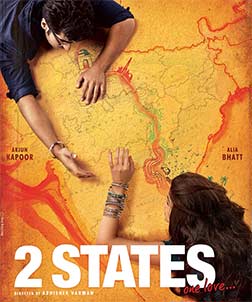 It goes without saying that a well-made romantic film can make your day.

"2 States" made mine! The movie came as a respite!

Long, long ago, I remember my grandfather grumbling: "Today's movies are meaningless, they only show 'dhishum dhishum'." A die-hard fan of Dilip Kumar, Dev Anand and Pardeep Kumar's style of romance, he used to find the emerging film culture of the 1980s, led by the likes of Amitabh Bachchan and Shatrughan Sinha, distasteful.

His disparagement of those action thrillers, stemming from the then political unrest with several actors playing the victimised working-class hero fighting corruption were not good enough to impress an old hat like him who used to savour social dramas and serene love stories like "Andaaz", Tarana", "Madhumati", "Patita" and "Munimji" made me cringe.

He felt those films offered a rather myopic view of contemporary youth and would discourage us from watching them.

At that time I had somewhat different views on the movies, but I could relate to his views when I went to catch "2 States", the big screen adaptation of Chetan Bhagat's novel of the same name, a delightful depiction of how cultural differences pose a threat to a Punjabi boy and a Tamilian girl's love life and marriage plans and how skillfully and maturely the duo handle the situation.

Despite being familiar with the story, which I read when Bhagat's literary work hit the shelves in 2009, and enjoyed the book not for its romantic escapades, but for the way the problems were treated and meted in the book, I was pleased with its celluloid presentation too.

Even though plots and sub-plots, characters and obstacles were the same, the slightly sluggish drama was thoroughly entertaining.

Refreshing content with a feel good factor was a much-needed break from the appalling love sagas that telly is serving day in and day out.

Not that I'm a big fan of the genre, but enjoyed the watch more so because romance has been criminlaised, brutalised, scandalised and demoralised on the tube, one's staple source of entertainment, so much so that it has lost its quintessence.

In the last few years, there has been a deluge of crime-based shows on the telly and the so-called outrageous real-life stories showing the revolting and repulsive side of romance, in which most often lovers are abused, murdered, tortured, or blackmailed for various reasons - be it to avenge hurt egos, cheating lovers or spouses etc, are being shoved down viewers' throat. And to my surprise, they are grabbing maximum eyeballs.

Not denying the existence of such crimes in real life, but too much of anything is bad.

Mind you, "2 States" is also a real life story of the author, but unlike the shows, here the lovers do not kill anyone for their union or have any hidden agenda behind falling in love or getting married.

In most of the crime shows, falling in love or getting intimate lead to MMS scandals or YouTube videos followed by heinous crime, thus making romance a forbidden thing.

In the current scenario, technology is a boon and bane. Bane, because it is being misused, and abused!

Yes, international shows are there, but they are for the classes, not the masses.

In a quest for de-stressing light drama, viewers end up watching the shows.

It's time television producers do the needful!

((Arpana is Cinema Editor at IANS. The views expressed are personal. She can be contacted at arpana.s@ians.in)