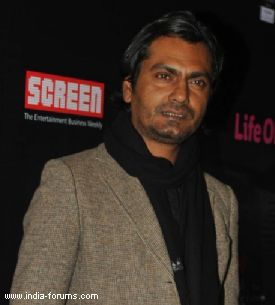 Versatile actor Nawazuddin Siddiqui, who will be seen playing the lead character in comedy film "Ghoomkethu", is pleased that now roles are also written for actors like him and not only for big stars.

"I am happy that while earlier films were written keeping in mind the stars, now it is done for actors. The films which are being written for the actors have different kind of characters," Nawazuddin said at a press conference here Tuesday to promote the film.

"Today, I am getting a platform where I can do varied characters which are not cliched with similar kind of films, costumes, looks and dialogue deliveries and I thank people like Pushpendra for this," he added.

Known for roles in films like "Kahaani", "Talaash" and "Gangs of Wasseypur", he likes to choose his scripts very carefully and believes the industry will not give him a second chance if he fails to deliver as an actor.

"It's very difficult to select a film because nobody will give us a second chance if we do a couple of wrong films. Everything will finish in a year or two. I don't want to perish like this. I have got something which I would like to preserve for years," said Nawazuddin.