View Profile
Rohit Roy a well known face of Indian Television and Bollywood Industry, whose movies didn't set standards at the box office, but his roles were still appreciated by the audience is anxiously awaiting the release of his two new movies 'Mittal v/s Mittal' and 'Apartment' on 26th March and 16th April this year respectively. 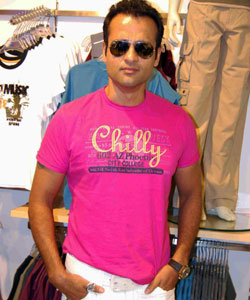 Where, 'Mittal v/s Mittal' is an issue based movie revolving around the trauma that a woman undergoes after marital harassment. And 'Apartment' on the other hand is a Romantic thriller which revolves around the adventures and thrills that occur in the life of one young couple sharing an apartment in Bombay by the entry of a new female neighbor.
In 'Mittal v/s Mittal' Rohit Roy plays the role of Howard University return Karan Mittal, son of a multi millionaire who is later been accused of marital harassment by his wife Mitali (Rituparna Sen Gupta).Whereas in Apartment he plays the role of Karan Malhotra an Advertising executive basically a boy next door or quite a ladies man' but then who falls in true love with Preeti Sengupta (Tanushree Dutta) and decides to share an apartment with her.

Rohit while sharing his experience about his above mentioned movies he asserted that, "It was indeed difficult enacting two roles that are equally opposite to each other in parallelism but still I had to undergo much more tough time performing the role of Karan Mittal. Because it is very difficult to associate oneself to Karan Mittal's attitude because his characterization has no similarity to my personal qualities".

He also added that, " I strongly feel for the issue of marital harrasment on women raised in 'Mittal v/s Mittal' because I as a person respects women a lot and so after understanding the the character of Karan Mittal I feels that people like him need real help and need to be corrected. And it is a social message for the women also to fight for the injustice and raise their voices against such harrassment ."

He even asserted that he has been indirectly helping an NGO working against child abuse and so he thought through this movie he could give his share of help to the marital harassment issue also. Overall he expresses that he had an wonderful time working with his two bengali co-stars and really excited about the release of his two movies back 2 back.

We wish him all luck for the success of his movies.