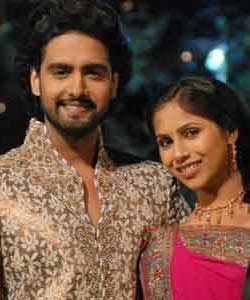 There have already been rumours in the air about the growing closeness of Rohit Purohit and his on screen pair Veebha (Vibha) Anand of Zee TV's Sanskaar Laxmi.

The new status of Rohit in one of the popular social networking site seems to have cleared the air as the status says 'in relationship'.

To get a confirmation from the actor, TellyBuzz contacted Rohit Purohit and here the answer comes, directly from the horse's mouth, "It's true that talks were in the town about our relationship but I was keeping it low profile because I was through a testing time. All happened when we both were together in the show working for hours. We liked each others' behavior. But I wanted to see whether the feeling existed even when we were far apart."

Rohit made an exit from the show earlier and that was indeed a testing time for him.

"After going through a separation of two months, i now firmly believe that I am truly in love with Veebha", adds Rohit.

"Today though we have declared our relationship in public, there is still time to tie the knot,"signs off Rohit.
We contacted Veebha (Vibha) Anand and she too opened her heart about her relationship with Rohit.

Tellybuzz wishes good luck to the couple for their togetherness…
Reporter and Author: Tejashree Bhopatkar
41 Likes

Patrarekha 8 years ago i don't like this jodi..don't like veebha with him...though i know its their personal life but its my personal life..i rather loved rohit and aastha

bablinisha 9 years ago everyone is in love these days, maybe i should join some show and find someone, wow i sound desperate, lol. congrats to me on my 75th post.

harvitha 9 years ago thats very nice... may god bless u guys with lots of love... and thanks for not saying the cliche dialogue of "just good friends"

Riyaa147 9 years ago aww thats good :) Congratz to both of them. I hope you both stay happy together

Ethereal-Path 9 years ago @dj_adnanss : so true.. even i was thinking the same.. lol
m really happy for these two. May they get loads of happiness! God Bless.

nuttycleo 9 years ago aww...thats so sweet!! they complement each other so well!!
am glad SL served some purpose at least!!

Who is AK in Sushant's Unseen Video that has Surfaced? Watch ...
a minute ago

No Bail for Rhea Chakraborty and Showik Chakraborty? Bombay ...
37 minutes ago

Arjun Bijlani and Reem Shaikh in Ishq Tanha is a soulful ...
55 minutes ago