Rohit Bakshi who essays the role of the brave warrior Ratan Singh in Sony's epic drama Chittod Ki Rani Padmini Ka Johur took just a crash course in horse riding and sword fighting, and then had to jump to live action before the camera. 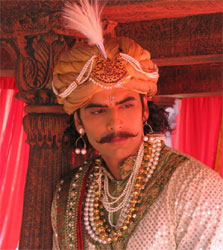 Featured Video
When questioned on his dedication to learning horse riding and sword fighting, Rohit says, "You might find it unbelievable but I got trained on the sets. There was no time to set apart just for the training. So when I used to land at the location for the shoot, they used to train me in whatever little time that was affordable. And then after a few minutes I would find myself giving the actual shot".

So wasn't that difficult? Learning in such a short time? "Luckily I'm a smart actor (laughs) so I picked up things very fast. It was strenuous especially with the heavy ornate costumes in the heat. But when I saw myself on the screen, I forgot all the difficulties I had to face. Instead it only encouraged me to put more effort."

Rohit has always experimented with his roles. He played a negative role in Kajjal and a very lovable role in Kumkum. He was also seen in Kahin Toh Hoga, Kyunki Saas Bhi Kabhi Bahu Thi and Mere Apne. And right now it's the historic figure of King Ratan Singh that appeases the viewers.

Who knows, maybe the variety of his roles would win him an offer for the big screen!

+ 5
13 years ago He looks very smart and handsome as Rajput warrior! BTW he was also in KYPH as Angad's friend and lawyer, Shabbir!

+ 3
13 years ago i know he is a wonderful actor.best of luck 4 him 4 his career.he really fits well in the role.

I still miss him in Kahiin to hoga....tbh I thought the Piyush-Kashish jodi wz the best...

good luck to him