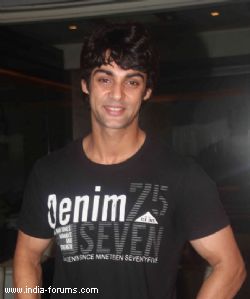 Karan Wahi a.k.a Rohan of Sony's "Kuch toh Log Kahenge" is charismatic and has innate sense of humour. His recollection of anecdotes leaves you in splits. Read on..

There is a confusion regarding where your hometown is. Some believe it is Delhi and others argue you are from Mohali, Punjab?
I'm a Delhi boy and do not hail from Mohali. I have no idea how this rumour started!

How did the journey from Delhi to Mumbai happen?
I was born during Soccer World cup and that probably explains my sports obsession. I played for Delhi and represented them in U-16 AND 17's. I shocked my parents after 12th std that I did not want to play cricket. There were no opportunities like IPL , and it was not possible for everyone to make it to the Indian Cricket team. I hit the gym and decided to enter Gladrags and Grasims. I got my pictures clicked and was called for my first audition. Ten days later I was in Mumbai.

Which is the character that you have played , is closest to you in real life?
I could not relate to Ranbeer ( Remix ). His demeanor and the accent were certainly not me. Siddhant's character ( Dil Mil Gaye) in the first half of the show was me. I did not have to act as I'm pretty kid like in life.

We hear your character 'Rohan' in Sony's 'Kuch toh Log Kaheinge' is turning negative?
I have been hearing this news as well, but be rest assured it is not turning negative. It is a case of falling in love with someone and then the feeling of jealousy takes over. He tries to do bad , but then he confronts himself and sets things in order.

IPL 5 has just commenced. Who are you cheering for?
There are about 7 teams I'm cheering for! I am friends with Shikhar Dhawan and Virat Kohli. But , if  I have to pick a team I'd go with Delhi Daredevils !

What is your off day like?
I end up getting at the same time at 7:00AM , all thanks to my maid. The day I have an off , I try and wrap up all my work early. Then I try and spend time with my friends and chill. With IPL now on , four hours are dedicated to it !

You say that you are a bad boyfriend material Why is that?
I'm too carefree and I have not been in a relationship for a really long time. I don't think I can do: accompanying to dinner or taking her shopping. I would not know how to get jealous. I love my friends and I have been their agony uncle for the longest time. My friends say that if I don't get off BBM and Facebook I would surely head for a divorce.

You were a drummer in school. What kind of music do you like?
Although I don't understand the lyrics of House music , I like listening to it. These days where ever I go I hear this song - Tu Mera Hero from Desi Boyz ! It is a good track.

Anything you would want to change about the Indian Television industry?
I would tell the producers to stop running after the TRP's. TRP's do not always paint the complete picture. This leads to the mentality of - 'Yehi Chalta Hai' and we start seeing a digression in the story line.

What is it with telly Industry and the name ' Karan'? There are so many Karan's !
There are about 17 Karan's I know. I think when the panditji said 'Naam - KARAN karo' , parents took it literally and named us Karan ( Laughs ). I think it is just a phase. During our fathers time we have Ajay's and Vijay's and now we have Karan. Hopefully , in the future mother's feel that all kids named 'Karan' are talented and charming!

8 years ago Glad he's not negative. he's too cute to be so.

8 years ago Karan Wahi, looking forward to seeing you in grey shades,it will be fun.

8 years ago Luv u Karan Wahi ...luv ur performance as Rohan..

+ 2
8 years ago Karan Wahi my cutiepie

_SaRunWahiFan_ 8 years ago love u Wahi Boy nd ur Logic of so many Karan's is awesome :p
U r the Best among all of them...muhaaa love ya