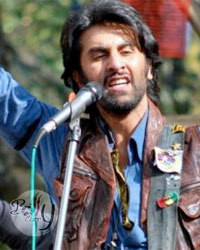 Along with Ranbir, Vidya Balan also continued her winning streak, earning the best actress award for her alternately heart-stopping and heartbreaking portrayal of Silk Smitha in The Dirty Picture.

Usha Uthup and Rekha Bhardwaj shared the title of best singer - female for their rendition of "Darling" in 7 Khoon Maaf.

Newcomers who walked away with accolades that night included Parineeti Chopra for her fiery role in Ladies vs. Ricky Behl, Vidyut Jamwal for his villainous role in Force, and Abhinay Deo for his directorial venture Delhi Belly.

The living legend Amitabh Bachchan was recognized for his widespread impact among and beyond the Hindi film fraternity.

The FICCI Frames events, which took place from March 14 through 16, concluded with the award function yesterday.