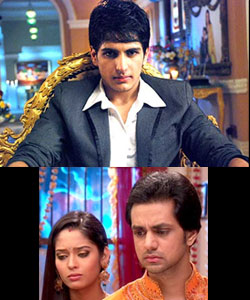 The track of Robbie (Rajat Tokas), Mauli (Neha Saxena) and Taposh (Shakti Arora) in Star Plus' Tere Liye will culminate this week!! And with it, the creative team will focus on the bigger track of Onu (Harshad Chopra) and Taani (Anupriya Kapoor) from the coming week..

As per our source, "Viewers can expect a dramatic finish to the Robbie-Mauli-Taposh track. Taposh who has been arrested will be sentenced with a seven year imprisonment. A sad Mauli will have a fall when she runs behind the vehicle in which Taposh is being taken. Mauli will have yet another setback when she loses her baby. She will be in a critical state for a while after which she gets better. Robbie who sees the suffering of Taposh and Mauli slowly gets to understand the mistake he has committed. As time passes, Robbie will go thro' a transformation with the help of Taani (Anupriya Kapoor). His obsessive love towards Mauli will subside and he takes a major step in uniting Mauli and Taposh".

This Thursday's episode will see the last of the three characters, after which the story will focus on Taani, Onu and Ritesh (Nikhil Arya). Onu in the meanwhile, will figure out that Ritesh is behind brainwashing Robbie and his hatred towards Ritesh intensifies.

The creative team is as of now planning the big twist in Onu and Taani's life. As per sources, Onu is expected have a fall from the cliff which will lead him to the mental asylum.

Lots of dramatic twists and turns expected as we head to the final phase of Tere Liye..

munni_rajatfan 9 years ago all the best rajat. u rocked as robi. eagerly waiting for ur next project.