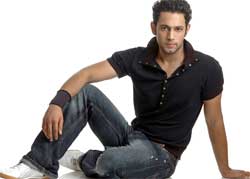 The latest trend in television is to rope in good looking faces from the scene of reality shows like Roadies, Splitsvilla etc into fiction shows.

As reported earlier by Tellybuzz, Sufi Malhotra a contestant of MTV Roadies 6 has now ventured into fiction with Zee TV and Hats Off Productions' Mera Naam Karegi Roshan.

There is one more handsome young guy from the Roadies platform who has found his place in the same Zee show. Yes, we are talking of Roadies 4 contestant Sahil Anand who is portraying the negative lead in the show.

Sahil was an engineering student when he made it to Roadies 4. He was a co-participant of Vishal Karwal who is presently playing the lead in COLORS' Bhagyavidhaata. Both of them made it to the reality show from Chandigarh.

Sahil Anand told us, "I'm enacting the role of Bheesham and it's an out an out negative character who aspires to marry Reet (Sanaa Sheikh) for political reasons. I have a complete Indian look and will be seen wearing a kurta."

His entry sequence in Zee TV has already been aired in the opening episode of the serial itself.

-Veena- 9 years ago Sahil.. you rocked as Akki.. best wishes.

-Deepali- 9 years ago RBO is superb and amzing.
liked your performance as akshay bha

-Simple- 9 years ago Didnt see much of him when I began watching RBO but did an awesome job from the amount I did see :)

-chocaholic- 9 years ago Liked sahil in RBO, he was great, lOve RBO

SHANAKFAN 9 years ago u did great as akshay..n RBO is d best...

purvi08 9 years ago RBO is superb and amzing.
liked your performance as akshay bha

Prernarbofan 9 years ago you were womderfull as akshayy n love you cuz you also helped in uniting our shanak yaar!!!!!!!!!