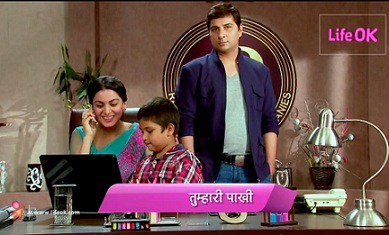 Shashi Sumeet Mittals' popular show Tumhari Paakhi on Life OK has been ruling the hearts because of the intriguing storyline. As the focus has shifted on Paakhi (Shraddha Arya) and Veer (Varun Badola) the viewers are interested to know the upcoming twists and turns.

As seen in the episodes Riya and Ayaan (Divyam Dama) can't get along with each other as she hates him to the core and also misbehaves with Veer. Their tiff gets worse when Riya puts cigarette packets in Ayaan's bag. The principal of the school calls Paakhi and Veer to inform them about Ayaan getting into a wrong company. Later Anuja (Anita Raaj) blurts out that Riya has put the packets in his bags.

In the upcoming episodes Ayaan spoils Riya's design to avenge from her.

Our source informs us, "The tiff will escalate even further as the design prepared by Riya will be spoiled because of Ayaan. They both will end up fighting again and seeing their tiff, Veer will be disheartened to know that all his attempts to be in the good books of Riya have gone in vain. This will make Paakhi also feel bad."

Will Riya and Ayaan's tiff conclude? Or will Anuja be successful in instigating them again?

ronshaan 6 years ago The show is great, story is supperb, cant wait for next episodes, love it ;)
Varun badola is very good actor, his scenes r rocking n funny , keep it up cv

luvbbat 6 years ago Since this is just the beginning of Riya being in the Rathore mansion, I am sure the riff between Ayaan and Riya will escalate. But eventually, both the kids will figure out the truth and become really close and Anuja's truth will be exposed. I am sure the creatives will do justice to this track too. Love Tumhari Pakhi.

angelicbabe 6 years ago I have a brilliant idea!!!
Why don't Pakhi and Veer together open up a child care center or something, where they can try to reform every spoiled child on this planet. Also, we can change the title of the show from "Tumhari Pakhi" to "Tumhari Maa".

anonee 6 years ago Thank you for sharing the possible story line.
I am glad the CVs are focusing on the bonds between 2 kids who are thrown together. Fantastic job CVs!

Shaina_b 6 years ago This show is trash but is still going on as it is Life OK's favourite!!!!

DeepikaHolic 6 years ago Nice article...but i find tumhari pakhi boring at times...although its once in a blue moon...but it annoys me...no intention to hurt anyone here..just being frank...

ronshaan 6 years ago Nice article, well it was not riya who did it, it was ANUJA who did it, thank you for the article,
Tumhari paakhi rocks , varun badola and shradha arya doing great job

zehra-pisces 9 years ago you are a great actor n i respect u a lot. wish u all the best for the new show looking forward to KTLK n ur onscreen chemistry with kritika