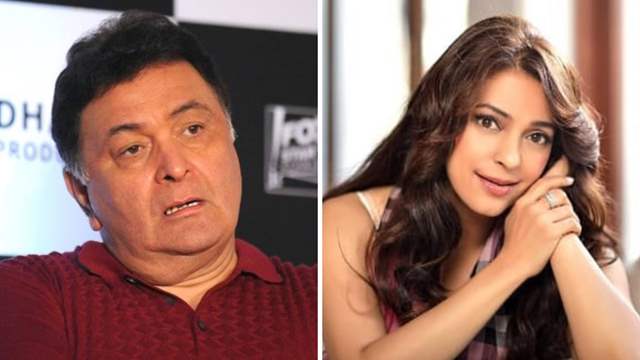 Bollywood’s OG chocolate boy, Rishi Kapoor left too soon and breathed his last on April 30, 2020, after battling with cancer for the last two years.

Ahead of his first death anniversary, actress Juhi Chawla opened up about shooting with Rishi Kapoor on his last film Sharmaji Namkeen. In a recent interview, Juhi recalled working with him and said that Rishi had a 'tough' exterior, but was actually a 'softie'. She told Times of India:

"Chintuji had a unique way of speaking — it almost always sounded like he was shouting at you. He had a tough exterior and the heart of a softie. Once I got used to his ways, and I figured out that this is how he was, I started enjoying that about him."

Juhi also shared how Rishi once called her 'insecure actor' for constantly going to the monitor to review her shots.

"One day, he actually called me an insecure actor because I’d rush to see the monitor after every shot. His shots were fantastic, and I was worried if I was holding up well. In his typical style, he shouted at me and said, ‘That monitor is for the director. Not you… you insecure actor.’ It was so funny... I never questioned why he had such a tough exterior, but over the years, I started enjoying it because it was cute."

Rishi Kapoor was working on the film Sharmaji Namkeen and after he passed away, Paresh Rawal was later brought in to complete the unfinished portions.

In a sad turn of events, another member of the Kapoor family, Rajiv Kapoor passed away on February 9, 2021, after suffering a cardiac arrest. On February 9, Randhir Kapoor had rushed his brother Rajiv Kapoor to the Inlaks Hospital, near their residence in Chembur. However, the doctors had reportedly declared him dead on arrival.