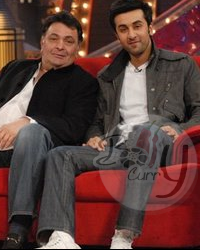 BollyCurry recently reported Pepsi's plan to bring together the father son duo, Rishi and Ranbir Kapoor, for their upcoming advert. For the countless many in anticipation, here's more on the detailing.

The ad plays along the concept of Rishi disdainfully dismissing Ranbir's grand plan to become a 'Crorepati' (Millionaire), until the theme music for Kaun Banega Crorepati  plays; and the ad consequently with a voiceover announcing "15 September Ko Pepsi Game Badle Ga".

Buddy and director Ayan Mukherji, from Ranbir's 2009 blockbuster Wake Up Sid, stepped forward to direct this new commercial which will air on TV come September 15th.

Rumours have been afloat in the market, of offers to sign this father-son duo for a movie being in plenty. If the advert sets any trends to go by, hopefully, the big screen too shall benefit in turn!