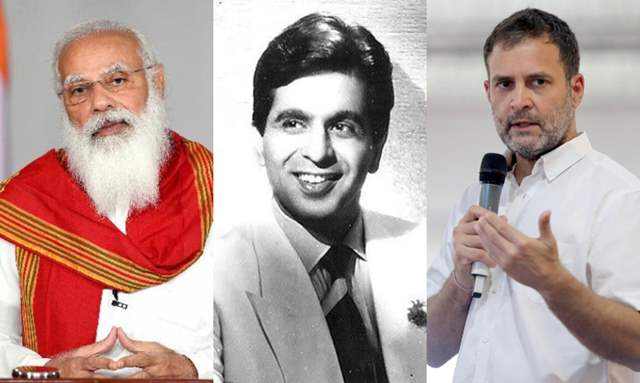 Prime Minister Narendra Modi mourned the sad demise of the legendary actor Dilip Kumar who breathed his last on Wednesday morning at Hinduja Hospital in Mumbai. In his latest tweet, PM Modi remembered Kumar sahab as the ‘Cinematic Legend’ and mentioned that he was blessed with unparalleled brilliance.

“Dilip Kumar Ji will be remembered as a cinematic legend. He was blessed with unparalleled brilliance, due to which audiences across generations were enthralled. His passing away is a loss to our cultural world. Condolences to his family, friends, and innumerable admirers. RIP (sic)”, read PM Modi’s tweet on Wednesday.

On the other hand, Congress leader Rahul Gandhi shared a picture of Dilip Kumar Ji and offered his heartfelt condolences to the family, friends and fans of the late actor.

“My heartfelt condolences to the family, friends and fans of Dilip Kumar ji. His extraordinary contribution to Indian cinema will be remembered for generations to come”, Congress leader Rahul Gandhi wrote in his tweet.

Dilip Kumar breathed his last at 7.30am in Mumbai's Khar Hinduja Hospital. The 98-year-old actor was suffering from lungs infection when he breathed his last. He had been in the ICU for the last few days after complaining of breathlessness.

Dilip Kumar is the star of classic Hindi films such as Mughal-E-Azam, Devdas, Naya Daur, Ganga Jumna and Ram aur Shyam. He was honoured with the Padma Bhushan in 1991 and Padma Vibhushan in 2015.