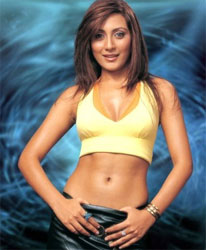 NDTV Imagine, the channel that hosts uniquely conceptualized programs has now announced the ‘Salaam-E-Comedy Awards’ in recognition of the genre of comedy films and the artists who are part of this popular genre. Produced by Percept D’Mark, the awards aim to honor the films released between January 1st to April 30th 2008 and will give away awards to  the Best Actor, Best Screenplay, Best Film, Best Comedy Character  and above all, Best Comedy Scene of the Year.

With Airtel Salaam-E-Awards promising madness unlimited and lots of naach-gaana, the talented Rimi Sen is all set to set the stage on fire in the awards!!

Rimi who was busy shooting in London could not set aside time to rehearse with the most renowned choreographer Pappu Mallu who was in India, but this did not hamper the dedication of either the dancer or the actor as the ace choreographer decided to send a dancer from his troupe all the way to London to train Rimi. The actress was so overjoyed by this gesture and gave more than 100% to her rehearsals post her movie shoot to ensure that her stage performance for the Airtel Salaam-E-Comedy Awards on NDTV Imagine will surely be a success story!!

The Awards has an eminent panel of judges from the industry like Ketan Mehta, Kundan Shah, Honey Irani, Sudhir Mishra, Satish Kaushik and Ashok Pandit who have shortlisted the nominations for the various award categories and will decide the winners.

Airtel Salaam-E-Comedy Awards will air on NDTV Imagine in September 2008.