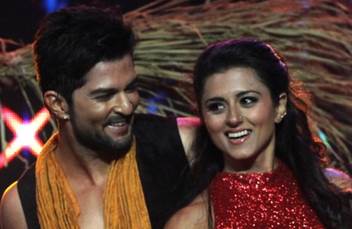 Riddhi Dogra and Raqesh Vashisth fell in love on the sets of a show, while playing an onscreen couple and later got married. Years after their first show together, Raqesh and Riddhi will return to television as a couple in Zee TV's New Year special event - Husn, Jashn aur Dhoka.

The two hour Telefilm is a murder mystery, set against a glamorous backdrop of a calendar girl pageant. Post their wedding, it will be the first time that the couple will feature together in a fiction telefilm. Raqesh will play the character of Akash, a crime branch officer, while Riddhi will play the spunky undercover cop Shanaya.  To get to the bottom of the mystery and track the killer, Akash will place Shanaya in the pageant as an undercover agent replacing the contestant who gets brutally murdered. As the film unfolds, the two will also be seen shaking a leg to some of the most loved songs of the year like Meherbaan, Manva Laage and Chaar Kadam. The real life chemistry between the two is evident on reel, as  they grooved in sync. From helping each other during the rehearsals to practising their steps together, the two looked just made for each other.

Talking about their experience, Raqesh said, "It's totally like the old times and fortunately everything is still the same. We are working together after quite some time and I am completely enjoying the experience. It won't be wrong to say, it feels like I'm at home when I shoot with Riddhi. She and I help each other with our lines  and also with our steps for the dance sequence. As it is a special telefilm slated to go on-air on new year's eve, we have got the opportunity  to act as well as dance. Our real life chemistry will definitely reflect on-screen. Hope the audience will enjoy this new year's bonanza on their television screens."

The two hour film will take the audience through the world of glitz and glamour and the secrets that lie shielded between the buzz of parties and the dazzle of the flashbulbs. Shanaya will string along a list of prime suspects with the help of her boss Akash, but will she be able to  expose the culprit behind the cold blooded murder?

To find out stay glued to your television screens this new year's eve.

+ 4
6 years ago Been waiting for the day to see RaQesh Vashisth and Ridhi Dogra Vashisth on TV together again. Cant wait &lt;3