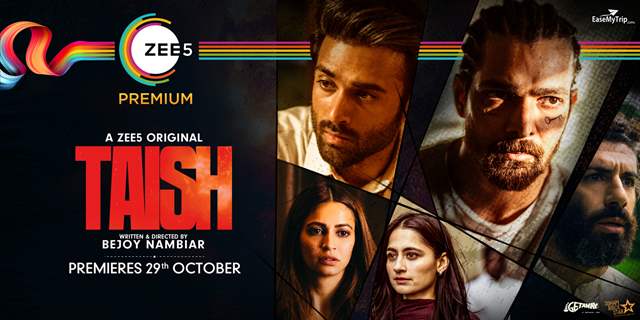 A Bejoy Nambiar creation is more often than not something I specifically look forward to. The filmmaker not only has a keen sense of storytelling but his unique approach makes his projects special ones - for the sheer attempt. Another one from Nambiar has now released on Zee5 in the form of Taish.

The series/film starring Jim Sarbh, Pulkit Samrat, Harshvardhan Rane, Kriti Kharbanda and Sanjeeda Sheikh is now available on Zee5 and having seen all the six episodes, here's what I thought about it.

Straight off the bat, the series is a revenge drama of sorts where everything ends up being about levelling scores amidst the primary characters dealing with their own demons. But the actual beauty of Taish is basically the meaning of the title and it's representation in the project. While it means being fluid and calm, the entire series makes sure that even amid the immense madness and chaos that the characters are involved in, you do see them being Taish in their own sense.

But there are more problems with Taish as compared to the positive aspects. Complex storytelling is always about treading on dangerous waters and while you can succeed with finesse, you can fail too. With Taish, Nambiar tries a lot to make the complexities work but it ends up being a flawed mess. This mess is staggeringly beautiful at times and otherwise, too convoluted.

One of the biggest problems with the series is the character development and the flaws attached to it. There are so many instances you will instantly question the logic behind the plot twist (for instance, Samrat's character of Sunny enters the jail to serve a sentence and gets out of it in a mere few days so easily with the help of a lawyer, you will laugh at it). The way the plot conveniently changes to move the planned story forward is laughable at times and rather bizarre.

Coming to the characters, Sarbh as Rohan and Rane as Pali outshine the rest of the cast and do their job well, while Kharbanda as Arfa is also a pleasant surprise. Having to portray some acting chops, she does rather well. Sheikh's Jahaan does well with whatever provided to her while Abhimanyu Singh as Kuljinder and Saurabh Sachdeva as Sukhi deserve special applause. It is however Samrat as Sunny that disappoints the most. He is pretty much the central piece of the show and has the maximum range to work with but even with that opportunity, the actors doesn't do much justice to it

The biggest plus for me in Taish is the music and background score - like it has been and should be with any Nambiar projects you see. The director's keen sense of music has always been one of the best things about him and that is at display even here. Gaurav Godkhindi, Govind Vasantha, Raghav Sachar, Prashant Pillai, and Enbee - all of them deserves kudos for the same.

Taish tries too much and ends up being an immensely flawed story that will only raise more questions than answers in the end. Multiple characters do not get any closure and the climax too is a mixed bag.

Special Tip: Do not watch it as a film even though that option is available. It is too long to be seen in one go and to watch it as a show is the best idea.