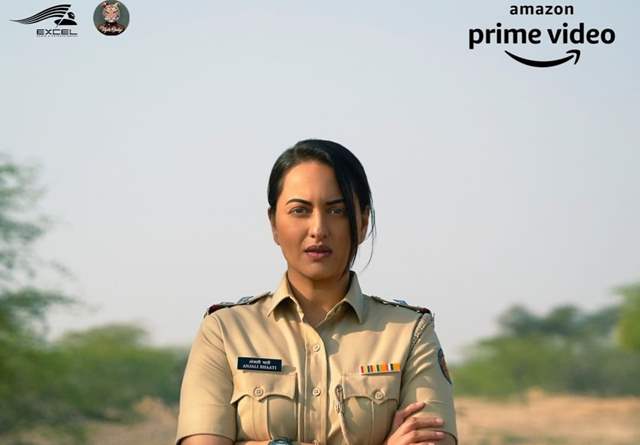 Tomorrow is the eve of Women's Day but before the actual day begins and everybody else pours in with their wishes and respects; Amazon Prime Video went on to start proceedings earlier and went on to reveal a look many have been waiting for.

Actor Sonakshi Sinha has already proved her mettle on the big screen and when last year it was confirmed that Sinha is all set to make her digital debut with Amazon Prime Video's show, the excitement has been high. And today is the day when Sinha's look is finally revealed from the yet untitled project where she plays a tough cop-

The untitled series is produced by Excel Media and Entertainment and Tiger Baby and will be directed by Reema Kagti and Ruchika Oberoi. The series also features Vijay Varma, Gulshan Devaiah & Sohum Shah. It marks Reema’s second outing with Amazon Prime Video following Made in Heaven, and Excel Media and Entertainment’s fourth collaboration following Mirzapur, Inside Edge and Made in Heaven.

Speaking of the series, director Reema Kagti reveals, “Sonakshi is an actor with the ability to seamlessly fit into every character she plays. She plays a tough cop in the series, and it is a delight to see her sink her teeth into the skin of the character. I’m excited to collaborate with Amazon Prime Video once again and truly looking forward to bringing this show to audiences across the world.”

1 months ago Seems good but Sonakshi's script choice sucks IMO... will wait for it to release and gain some reviews!