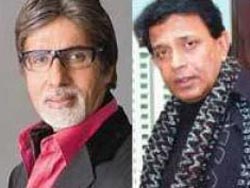 It's not every day that the legends of Bollywood get to share the same stage. However, the stage of Zee's Dance India Dance witnessed such a happening as Mithun Chakraborty and Amitabh Bachchan came together for an event after twenty whole years. The last time they met was during the shoot of 'Agneepath'.

According to our source, "Big B and Mithun Chakraborty had a marvelous reunion of sorts. But Big B didn't come as himself. He came as Prof. Venkat Subramaniam, his character in Teen Patti. Both the veteran actors did the task of rating the contestants on a scale of one to ten."

Adds the source, "The three masters have arranged for some nice numbers where they can include Big B. Remo is doing a tango and jive act on one of Amitabh's famous songs Apni toh jaise taise. Terrence is planning to pay homage to Big B's favorite star Dilip Kumar ji with a salsa act on the song Nain lad jaibe. Geeta, who has already lost three of her contestants, is putting up an aerial cube act which features lines from Dr. Harivansh Rai Bachchan's Madhushala."

The source further reveals, "The shooting for this episode is taking place today at Famous Studios in Mahalaxmi."

Catch this episode of Dance India Dance on 29th January at 9:30 pm on Zee TV.

+ 3
12 years ago With this intro of Big B's character i think Teen Patti is based on film 21. It is about using mathematics and will Casino card games .. In English it is superb film and is a soft thriller..