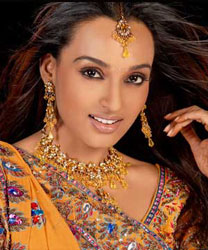 Reshmi Ghosh aka Nupur was actually running about in the hospital sequence feeling anxious for Ananya (Garima Bhatnagar) who was rushed to hospital with complicated labor after having a fall in Star Plus' Tere Liye. However, the heavy toll of shooting for long hours without a proper break and rest affected Reshmi so much that she fainted while shooting for the hospital scene.

Our source from the set says, "Reshmi was shooting for a pretty tense sequence in the hospital when she all of a sudden collapsed on the floor. There was immediate tension on the sets, and doctors were summoned. Her co-actors lifted her and took her to a better aerated place. The shoot was halted for quite a long time".

We tried calling Reshmi Ghosh but she remained unavailable.

However, an actor from Tere Liye on terms of anonymity confirmed the news that, "Yes, Reshmi fainted on the sets, and the shoot got halted for some time. She is completely exhausted after shooting non-stop, she needs some rest as of now".

Guess this is the price actors in daily soaps need to pay to attain success..

sharmeeli 9 years ago get well soon Reshmi, Take care of yourself

ruexangel 9 years ago they need to abide by the working rules, this is the result of overworking them!

and take care of yourself =)

nuttycleo 9 years ago Full smpathy for the actress but as far as the show goes... I'll say...Ekta needs to go a bit slow with Reshmi..give her fewer scenes so that she doesn't mess with TaaNu love story!Naa rahega baas na bajegi basuri!!

sanchita1410 9 years ago Poor girl. This Balaji really slave their actors. Hope she gets well soon.

Rhea Chakraborty did not name any Bollywood actors during ...
12 minutes ago