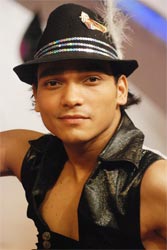 Zee TV's Dance India Dance will see its first elimination this week after the Behetareen Baraah was formed. And the result comes as a complete shocker as Shashank Dohra, who was considered to be one of the top favorites was shown the door by public.

According to our source, "Shashank from Remo Ke Rangeelay gave a splendid performance this Friday and his aerial act was appreciated by one and all. Unfortunately, viewers thought otherwise and ousted him from DID 2. The contestants in bottom three were Nikkitasha Marwah, Binny Sharma and Amarjeet Singh. Dharmesh Yelande got the highest votes, while Jack Samuel Gill got the second highest votes and Saajan Singh was the third highest".

Among the performances, Shakti Mohan's Indian dance was appreciated by the mentors.

11 years ago I LOVE DARMEAH SIR! HES SUPERB!!!! SHAKTI IS ALSO ONE OF MY FAVORITES!!!

+ 4
11 years ago he never deserved to be in the top12 anyway. parvez should've been in instead. so gr8 decision!
and jack got the 2nd highest! :D

+ 3
11 years ago binny in bottom , ya shows the nature of audience ..... well hope the judgement was left to mithuda he was gud and best

+ 5
11 years ago very glad that darmesh was number one and also so happy that jack is getting all the love he deserves!!! but kinda sad that shashank was the one to be ousted!

11 years ago OUFFF !!
just someone spread a rumour that shakti waz out n i waz just sooo scared !! dayum i waz praying this to not happen !!
THANKKKK gOSH HEZ GONEE !!

+ 3
11 years ago im glad he's out..
i always felt ki parvez deserved to be in the behtereen baara instead of sashank...
anyways...
i want dharmesh to win!!!