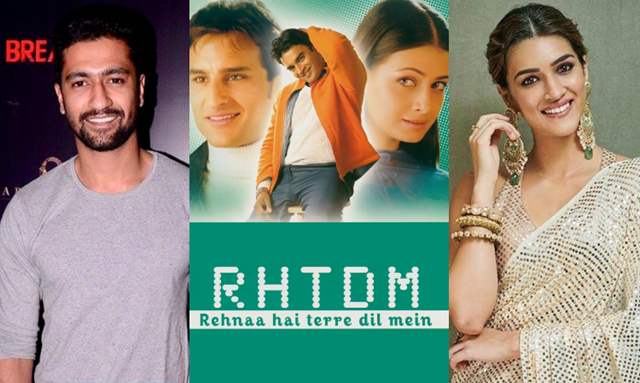 R. Madhavan and Dia Mirza’s Rehnaa Hai Terre Dil Mein (also called RHTDM) recently became a retro hit, is all set for a remake 20 years later. The iconic film will clock 20-years in 2021 and the film was known to be an instant hit amongst the audience and the fans have been earning for a sequel for a long time now.

However, in a recent turn of events, a SpotboyE report suggests that the film is set for a remake 20 years later.

Confirming the same, Ravi Udyawar who has been elected by producer Jacky Bhagnani to direct the remake says, “It’s going to be a remake for today’s generation. Same soul but a fresh intense love story,” reported SpotboyE.

Previously, the film was slated for a sequel which was speculated to star the same cast - R. Madhavan and Dia Mirza from the original film. Meanwhile, several reports surfaced about Vicky Kaushal and Kriti Sanon co-starring in the Rehna Hai Terre Dil Mein remake. However, the SpotboyE report has shut down these rumours and stated that the cast is yet to be decided.

Director Ravi Udyawar further commented about Madhavan and Mirza’s film and said “All of us  worked really hard on the film. 20 years later Rehnaa Hai Terre Dil Mein is still among the most favourite films of my repertoire.”

Previously, R Madhavan reacted to the reports of RHTDM getting a sequel and had expressed his happiness at being part of the sequel.

“I keep getting that all the time. But is a sequel possible now? For that to happen, all of us have to be on the same page. I’d love to take the story forward from where we left it off 20 years ago,” said Madhavan in a previous interview.

RHTDM also marked the debut of two of the lead actors, R. Madhavan and Dia Mirza, which is considered to be a cult classic not only for its direction but also for its music that is loved by millions even today.