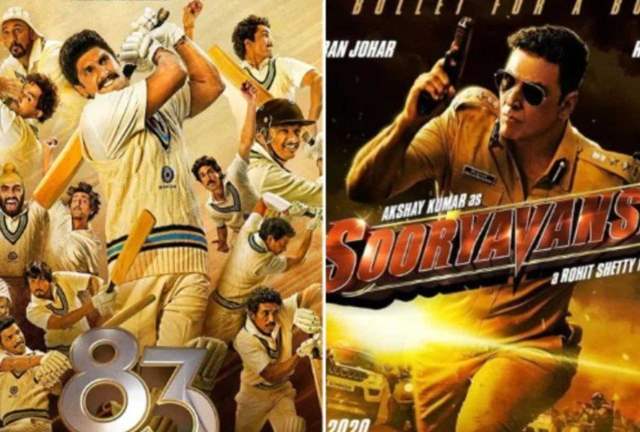 The release of two highly anticipated films of 2020: Kabir Khan's '83 and Rohit Shetty's Sooryavanshi was indefinitely postponed in the wake of the lockdown due to Coronavirus.

Fans were excited to watch these two big banner films, however, had to wait for a long time for the revised release dates. And finally, the wait is over.

In the latest update, movie theatres were announced to operate from October 15 2020. Ranveer Singh's '83 is now confirmed to have a theatrical release on Christmas. Meanwhile, Akshay Kumar's Sooryavanshi will be pushed to next year.

A Mumbai Mirror report has quoted Shibasish Sarkar, CEO, Reliance Entertainment, co-producer of 83 and Sooryavanshi, as saying, “We definitely don’t want to change the date of 83 for Sooryavanshi. The sport drama is still slated to release on Christmas. We have to decide on the new date of Sooryavanshi with the director and actor, but the film should release between January and March.”

Meanwhile, Rohit Shetty's Sooryavanshi the film was initially slated to release on 24 March 2020, but the release has been postponed owing to the coronavirus scare. The highly anticipated action film  also features Katrina Kaif as the female lead and marks the reunion of Kat with Akki after nine years. The film also stars Ranveer Singh and Ajay Devgn in a cameo role.