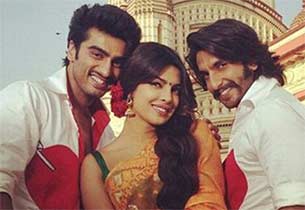 The movie, set to release Feb 14, is directed by Ali Abbas Zafar.

"It's amazing to see their friendship. I have done a lot of two-hero films and you can make out whether it's true friendship or just show off," the 31-year-old, accompanied by Ranveer and Arjun, said here Monday on reality show "Dance India Dance."

"But these two are actually good friends which is nice to see, especially in a two-hero film, made the film for Ali also very easy," she added.

However, Priyanka says the two are poles apart in real life.

"They are poles apart, very different people. They are completely opposite to their characters in the film. Ranveer is instinctive, Arjun is calm and steady and thinks before doing something. But they both know how to have a lot of fun," she said.