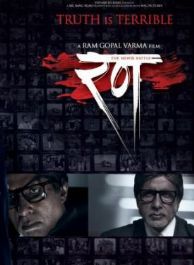 Featured Video
Even before the film's release, many channels panned Ram Gopal Varma saying- he is making a film to get back at media. Ha-ha. That statement seems like a joke now that I've watched this film. What instead RGV has done in Rann is show both the sides of the coin.

The interesting part is, the channel India 24*7 run by Vijay Malik, that runs following all the principles of journalism, is suffering to stand on its feet, whereas, the channel run by Kakkar, that runs by selling news in gaudy packages is doing top ranks! 'Let the anchors wear bikinis and host the weather report, those who wanna know the weather will know, and those who wanna watch will watch', says shady Kakkar.

Then there's this obnoxious filthy politician Mohan Pandey (Paresh Rawal) who aims to be the Prime Minister no matter how gross the cost. He's looking for a nice media partner to PR his route to the seat. There's this son Jay Malik (Sudeep) who's itching to get his channel at the top position. There's Purab Shastri (Ritesh Deshmukh) who has admired, sorry worshipped, Vijay Malik for all his life and aims to be a journalist who can make a difference to this country. There's businessman Naveen Shankalya (Rajat Kapoor) who's sole aim is to make his company popular and ultra-profitable using either father-in-law Malik's channel or his competitor Kakkar's.

These are the basic players with a few more secondary ones, who get pulled into a wild tornado when the lust of politician Pandey for position, feeds greedy ambitiousness of budding entrepreneur and hopeless debtor Jay Malik. Integrity is honored in the end, with Big B playing savior of sorts mouthing his by now famous thirteen minute speech. Trust me, that's one gripping speech!

The story runs in a very basic linear pattern with not much of nail-biting suspense. But the message of the film is loud and clear- 'Media, think where you're headed in this mad race for TRPs'. And it's about time Bollywood came up with a film like this.

What beats me is why does the flicking of the cigarette lighter by Jay Malik get so much importance? Are we trying to re-invent the cigarette flicking suaveness of Rajnikant in Bollywood? Why Neetu Chandra was chosen to play the eye-candy? She is so not!

Another disappointing fact, while Sudeep looks cent percent perfect as Big B's onscreen son, his accent gives it all away. If the father can speak fine Hindi, obviously the son can't have a southie accent. It completely takes the flavor of the sequence away. Otherwise there's great father-son chemistry between the two of them. Wish RGV could've invested a little more in Sudeep's accent training.

Camera-work is weird. Like, there was a shot where, Ritesh and Gul Panag are engaged in a conversation and even when Gul was speaking her face wasn't focused. It was not even like she was telling something earth shattering that Ritesh's reaction was of more importance.

Music is thumping, powerful …like a very strong cup of Assam tea or the all-American black coffee.

Amitabh Bachchan, can never go wrong with histrionics. His intense dramatic expressions imprint your mind and leave you in a daze. The first interval of the film drags and frankly I feel it's because of lack of scope for Big B. The final address that Vijay Malik makes to the nation leaves you with your mouth wide open. His look as corporate czar is cool and crisp. Definitely a pleasure to see him in this clean-cut avatar!

Paresh Rawal as the hideous red-forehead minister is so good at playing his part that by the end of the film you wanna slap him!

Ritesh Deshmukh as the composed then confused and later a silently stubborn journalist is smooth. I wonder if any other actor could have played this part in the same convincing manner.

Sudeep is awesome! One of the better imports from the southern film industry. He deserves to rub shoulders with Big B.

Suchitra Pillai as the vixen trying to feed off of the lion's leftovers is good. Gul Panag as Nandita is cute! Simone Singh and Neena Kulkarni are sweet.

Rajpal Yadav comes across as a non-likeable yet funny guy. Rajat Kapoor does perfect as the white collared thief.

When it comes to good films and bad films of Bollywood, Rann has just managed to tip over to the 'good side'.