Director Ram Gopal Varma describes his forthcoming movie as a 'men's film' and says it was natural for Amitabh Bachchan to spearhead the show in the promos of the movie. 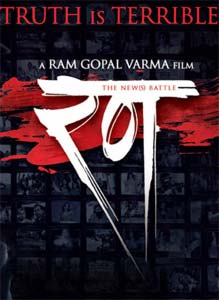 Featured Video
n't that obvious? With the kind of personality and the stardom that he enjoys, it is but natural that Amitabh Bachchan would be spearheading the entire film,' Varma told IANS.

If one goes by the film's synopsis, there are other characters like Sudeep, Riteish Deshmukh, Mohnish Behl, Paresh Rawal and Rajat Kapoor who have been described to be quite important. What sort of space and time has Varma managed to create for these characters?

'Every other character is important; otherwise it wouldn't have found place in the film. There won't be any character that would feel short-changed or left out in the film,' said Varma.

Where do Neetu Chandra, Gul Panag, Suchitra Krishnamurthy or Simone Singh fit in?

'Women are supporting characters in 'Rann' which is indeed a men's film. They may not be directly involved in the conspiracy or the entire drama that ensues in 'Rann', but they definitely bring in a humane aspect to the proceedings,' said the director.

'Suchitra plays the role of a programming head with Amitabh Bachchan's new channel and she is in constant conflict with him since she can see the cut throat competition in the outside world. On the other hand, Gul is indifferent to what's happening in the country and first thinks about herself and her man (Riteish Deshmukh) before anything or anybody else.'

Neetu Chandra, who had replaced Raima Sen in the film's cast just before the shooting, is paired opposite Sudeep and also has a few scenes with Amitabh Bachchan.

'Hers is one character which keeps her completely out of the entire political equation and does not understand the intricacies of power games and hidden motivations behind actions of people. Bring them all together and they represent the common man,' said Varma.