View Profile
Rani Mukherjee, who has made her comeback with Yash Raj's, "Dil Bole Hadippa", will be seen playing the role of a Punjabi girl who transforms her look into a Sikh man.This is done because she wishes to make her way into the men's cricket team.
This transformation has provoked some agitation in Punjab, especially among the 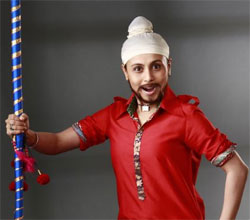 Featured Video
Sikhs, since they believe that the turban Rani is sporting in the latest Yash Raj movie does not give the correct perspective of a Sikh Man. According to a few members of the Sikh community, Mukherjee is playing the role of a grown male adult who is wearing a turban that a young Sikh boy wears, technically termed the 'patka'.
Sources also reveal that the Sikh Community is considerably upset, because producer Yash Raj, being a Sikh himself has not managed to give due respect and importance to the portrayal of a Sikh in his movie.
Further more, the community members have said to be demanding a special screening of "Dil Bole Hadippa", to scan for other delicate susceptibilities similar to this situation. Coincidently, recent release staring Saif Ali Khan & Deepika Padukone, "Love Aaj Kal" also faced a few talks amongst the Sikh Community, for showing Saif Ali Khan wooing his love in a Gurudwara