Mumbai, Nov 4 (IANS) Ranbir Kapoor and Sonam Kapoor, the lead pair of the much-awaited film 'Saawariya', won the hearts of many as they danced and interacted with people on reality dance show 'Jhalak Dikhla Ja'.

'Both the kids just won over everyone with their 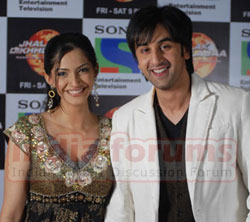 Featured Video
down-to-earth nature. Everyone from the audience to the contestants to the judges just kept looking at Ranbir and Sonam affectionately all the while that they were there,' said a source in Sony TV, which organises the dance competition.

One of the high points of the show was when Ranbir emerged from the green room before his performance just to touch judge Jeetendra's feet. Jeetendra and Ranbir's father Rishi Kapoor have been close friends for years.

'Just before his dance performance Ranbir slipped out and rushed to touch Jeetendra's feet. He also greeted the other two judges - Urmila and Shiamak Davar - with lots of affection. Then Ranbir took to the dance floor,' the source added.

Hostess Mona Singh's mother, who was on the sets, gave Sonam a big hug and showered her with kisses. Sonam is actor Anil Kapoor's daughter.

Said Ranbir: 'I love these interactive shows where one gets to be in the midst of people from various walks of life. It gives me a chance to know where I stand with the audience. I also love to dance.'