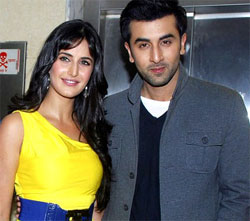 The Second Season of Zee TV's very popular show Dance India Dance has now reached its Final stage, as the winner will get crowned with the Sunehri Taqdeer ki Topi on the 23rd of April.

The Grand Finale will see the likes of Dharmesh Yelande, Punit Pathak, Shakti Mohan and Binny Sharma fight for ultimate glory by coming up with spectacular performances.

Just as we thought Hrithik Roshan would grace the Finale of this season's Dance India Dance, the latest news is that the Ajab pair of Ranbir Kapoor and Katrina Kaif will be the hot celebrities present to witness the finale.

According to our source, "The mentors Geeta Kapoor, Remo D'Souza and Terrence Lewis will be shaking a leg in front of the live audience. The entertainment quotient will be high with the presence of the popular pair of Ranbir Kapoor and Katrina Kaif, who will be present to promote their upcoming flick Rajneeti".

We tried calling Ashish Golwalkar, Non-Fiction Head Zee TV, but he said, "There are quite a few options. But we have not decided on the celebrity to grace the Finale".

KaranGrover.xo 9 years ago OMG That's Gonna Be Great I Love Ranbir And Katrina' Couple It's Great And Finally They Will Rock Together. They Are The Best Couple Ever!!

deepsi 10 years ago either shakti or dharmesh sir shld win..

Bt still happy for others..:))

Gur.N.cool 10 years ago i hope the finale is rocking, but hate them for keeping it on friday

abhi_12 10 years ago HRITHIK WOULD HVE BEEN A TRUE GUEST IN ALL SENSES..ANYWAYS..