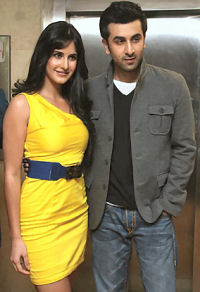 Are directors everywhere conspiring to make Ranbir Kapoor and Katrina Kaif the next big jodi on the big screen?  Or is it just filmmaker Rajkumar Santoshi, who having tasted commercial success after a long time with Ajab Prem ... wants to push his luck a wee bit more?!

His older ventures like Lajja and the Legend of Bhagat Singh strove for realism and were critically successful.  But the more recent projects have been too soon shelved to accomplish much at Box Office; that is until Ranbir and Kat (whom he now sees as his lucky mascots) happened in Ajab Prem ... !

Thus the director is keen to roll out another romantic comedy with the duo, the shooting of which is likely to start before the years-end.  The producers for the movie are likely to be Ashtavinayak and buzz is that two more actors will step in for pivotal roles.  However, neither the names of these actors, nor the title of the movie has yet been finalized.
5 Likes