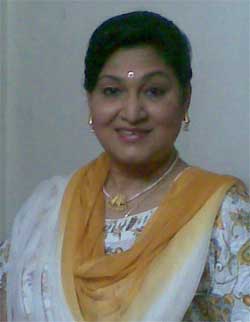 Ramna Wadhawan, a veteran actor who has done both Bollywood and TV, will enter as Sweety's mother-in-law. It has already been established that Sweety is uncomfortable with her mother-in-law because she doesn't like her. On the other hand, Lucky (Vivek Mushran) is super happy and is stuffing all the things that his mom wants him to eat.

We contacted Ramna who confirmed the news, "Yes I am entering the show as a Punjabi mother-in-law who always wants her son to eat and stay fit. On the other hand, her daughter in law thinks that she doesn't like her. She is not strict but orthodox. I love the character."
Ramna Wadhawan will enter in the coming episodes of the show.

A HUGE FAN 8 years ago I love this serial. Its great & exactly revolves in real life too.

100prabh 8 years ago Omg finally the much awaited is going to happen
Wonder how sweety ji will react
Will be waiting for u!!
I desperately wanted to know hu sweety ji's sasuma was going to be!??
Thanks for the news and looking forward to this!!!!

swethasyam08 8 years ago finally the much awaited track. looking forward for this track...

-Nightingale- 8 years ago we are loving the character and track before it has entered..

best of luck to Ramnaji

Nawazuddin Siddiqui Waited 20 Years to Work with Sudhir ...
16 minutes ago

Rakul Preet Singh confesses to being a part of drug chats ...
46 minutes ago