The 15th Annual Star-Screen Awards was held on January 14th, and it was high on drama, entertainment and certainly some not-so-called for masala. Something the audience and certainly not the brother-sister duo of Farah and Sajid Khan had bargained for. Well, we will come to that later. 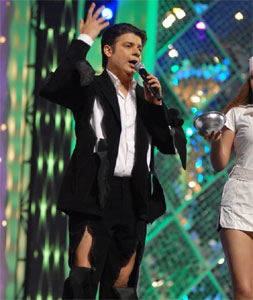 Featured Video
Interestingly, Farah attributed her first shot at being Master of Ceremonies to recession and her three babies… 'Please take all our jokes with a sackful of salt as I'm doing this purely for money’, she said.

Sajid and Shreyas Talpade who joined her in hosting a few segments of the ceremony kept reminding the audience that the event is mainly for the 'TV' audience. Every time, the audience didn't clap or smile (which happened more often than not), Sajid would say, 'Don't worry Farah, TV pe yeh jab aayega tab usmein canned laughter or recorded applause daalenge’. Then when Bipasha Basu couldn't perform because of the time deadline, Sajid quipped again, 'Don't worry audience, you will get to see it on TV because she would shoot it by then'.

So it was evident that the below-the- belt humor the Khans and Talpade indulged in was mainly for the TV audience as Sajid said, 'Today, award shows are mainly television events. They are complete with acts and gags because they have to get TRPs for the channel.'

And so every time a winner would go on the podium, Sajid and Farah would tell them to make it quick or cut them short or ridicule them probably just to draw the laughs. To give the hosts their due, a couple of Sajid's gags were entertaining, some jokes did evoke a smile or a hearty laugh and they certainly have the gall to take the pants off, just about anybody and everybody… but there was one person in the audience who certainly wasn't willing to take it in his stride and that was Ashotush Gowariker. The Jodhaa Akbar filmmaker certainly didn't take kindly to Sajid's sense of humor. 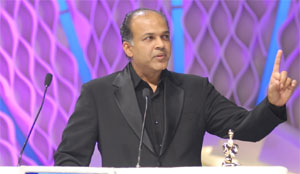 And so when Gowariker won the award for Best Film he expressed his disgust. This is what he said, ‘I look up to these film awards, have always wanted them but I am deeply hurt and disappointed with the way tonight's event was conducted. The demeanor was all wrong. It's not fair on the hosts' part to ridicule the film industry, the winners and
the nominees. To cut them short when they want to express their gratitude, to be rude to them and making some unkind remarks all in the name of entertainment is just not done. It's as if the awards itself hold no sanctity or respect’.

Gowariker didn't stop at that. When Sajid tried to butt in, he said, ‘Don't interrupt. Shut up. I too can make fun of you,’ to which Sajid said, ‘So who's stopping you? Go ahead.’ Gowariker retorted, ‘No, I won't and that's the difference between you and me’. Sajid was shaken for sure, though he stood his ground and said that his sense of humor is his USP and that ‘kisike baap mein itni himmat nahin ki woh mujhe bataye ki mujhe event kaise host karna chahiye’.

When Farah joined her brother on the podium for one more time to announce the last set of awards, she had tears in her eyes as she said, ‘I have been in this industry for 18 years and my brother and I have the highest regard for the film industry and if we are making fun tonight, it's because we think we are amongst family and friends. We feel bad if we have hurt someone, but we are not going to apologize to anyone’. Ashutosh Gowariker only shook his head and was in any way no mood to step back.

While all this drama (now, this is reality TV, purely unscripted and full-on tamasha with everybody flashing their claws) Gowariker said, ‘He knew would be completely edited, he was glad he had made his point and so were a large part of the audience who cheered lustily for the filmmaker’.

Now, if Star Plus wants those numbers on the ratings chart, they have loads of volatile material on hand, and this time it's not even 'scripted' or 'gimmicky', it was all there for everyone to see. The Bollywood mask is slipping, and Star Plus could very well cash in on that.

The event will be telecast live on January 25 on Star Plus at 8 PM..

smart amy girl 13 years ago thanx..i saw the awards last nie n found that sajid-farah were realy very rude..ashutosh was rite dat actors do soo much of hardwork to cme up in the indusrty nd in jus minstheir whole image or reputation is spoiled..!!!! dats not rite...!!! very rude of u sajid.....comedy doesent mean emrassing people on national television or makin fun of them..!!!!

13 years ago i''ve seen the promo!
it looks quite shocking!
definitely watching this show!

13 years ago I saw the video and yes Sajid is a BIG sore loser; he deserves even worst than this.

+ 2
13 years ago Its jst a stupid joke..get over it..drama in award functions are not excepted so this must be intresting to watch...!

13 years ago what crap is this!! If its true sajid is a loser..but i dont blame him coz his jokes r toooo funny..!!! IM angry cozzzz imran dint get the best debuet award!:-((((

+ 3
13 years ago WOW! that is really interesting to read!
haha!
can''t wait to see it!
&&
what the heck...bipasha didn''t get to perform cuz of this? how sick and sad. Awards are supposed to be fun and full with happiness. there is already too much drama everywhere...we don''t need it in award functions.
gosh.

Sajijid Khan is not funny, he is so RUDE! a complete LOSER.

+ 10
13 years ago Way to go Ashutosh!! Sajid''s been taking it too far since a while now. Infact, most awards shows hosted by him often have ''jokes'' of very poor taste. Ashutosh has rightly pointed out that there is no dignity or respect left to awards shows anymore....and ppl like Sajid Khan have greatly contributed to that.