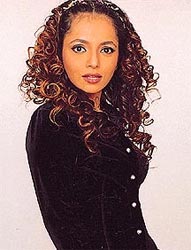 
“It’s a comedy role I can say that and a small cameo. I come into the picture to change Pooja’s personality by making her modern,” says Rakhi.

She will be essaying the role of Julie in the show, a makeover artist. She comes in and changes the looks, personality of the leading actress Pooja (Sana Saeed) who aspires to become a great singer one day. Julie will teach her of how to be modern in body language and talks.

So when can we see you in a full-fledged role? “Well now no more TV serials for me as I’m focusing on films. I have 4 to 5 projects in the pipeline but can’t talk about it now. Will speak when the right time comes,” she concludes.

Well definitely Rakhi is on her way to fame after Bigg Boss. We hope this second innings of Television's Sweety will be a success story!!

14 years ago All the best Julie/Sweety. Good Luck...

+ 7
14 years ago OMG LHGPIGK is lyk a nyc show and it is gonna be fun, the comedy and overall show is a blessing in the tragedy world of TV shows...looking forward to c Rakhi