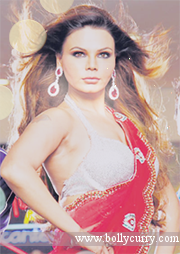 e further elaborated that she rejected both proposals because of the subject matter contained in the films.

Apparently, she was expected to do a love making scene with Gladiator's Russell Crowe.

The item girl just wasn't comfortable doing such scenes. She revealed that she was perfectly fine doing pole dance scenes but on-screen love making was one thing that she never would agree to doing.

She was also expected to wear a two piece bikini but the gal was not happy with that either.

What's even more interesting though is that her next film, Ashfaque Makrani's Qasam Se Qasam, requires for her to be a sex teacher named Delnaz Dhoodwala. A tad contradictory, don't you think?

In simple words, our dear Rakhi Sawant isn't ready to move out of her comfort zone or just not prepared to enter Hollywood! What are your thoughts?