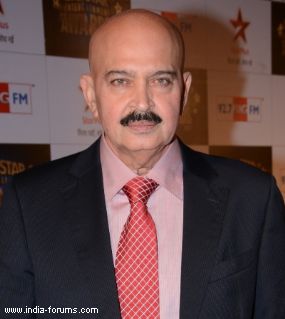 A fierce fire that broke out in a posh highrise building named Lotus Business Park in Andheri here left one brave fireman named Nitin Ivalekar dead. Filmmaker Rakesh Roshan has gotten together with the other property owners of the building to offer a compensation to the fireman's bereaved wife.

"We've decided to give the wife a cheque of Rs.15 lakh. It is nothing to compensate for his death. But it will help her with her son's education," said Roshan.

Apparently the fire fighter's wife demanded a written assurance from the government that the deceased fireman's family would be financially looked after. However, it is not yet known what action the state government has taken to compensate the Ivalekar family.

"What happened was a terrible accident and 'not sheer bad luck', as a section of the media has wrongly quoted me as saying. A word like 'luck' reduces the enormity of the terrible occurrence. No. I think what happened was way beyond bad luck.

"And when we heard about the brave fireman's death and his wife and child we were deeply shaken. We thought we must do something," said Roshan, who owns notable property in the ill-fated building.

Rakesh feels such accidents should not be treated as only the government's problem.

"In a high-rise building there are many floors owned by people who can afford to compensate personally for damages if and when such an accident occurs. There were 22 floors in the building were the fire broke out. The fire broke out on the 21st floor. But the firemen could only reach up to the 17th floor. What if the building was much taller?

"There were all the fire-safety equipments in the building. But nobody seemed aware of how to use them in the building. Given the risky situation anything could have happened. Many lives could have been lost. One man did lose his life. And he died trying to save property and lives. I think we in the building owe it to the deceased man's party to make small monetary compensation," he said.

The filmmaker says he only owns property in Lotus Business Park.

"We have no active business concerns in the building. Miraculously no damage has occurred within the property because of the strong fire-proof windows. We are told we can re-occupy our property in two months. But we need to do some serious thinking about safety measures in high-rise buildings."

One brings to the producer-director notice that his family has been facing some major setbacks in the past year - Hrithik's back problem, which has considerably slackened his career's pace, then Hrithik's shocking breakup with his wife and now the fire.

"Pray for me and my family. Please pray that nothing more goes wrong," said Roshan.