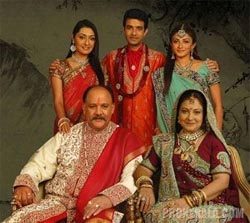 Rajshri Productions recently had yet another moment to celebrate as their show on Zee TV, Yahan Main Ghar Ghar Kheli achieved its first major milestone of completing one year. The production house had organized a party which was graced by the Zee TV heads and the cast, crew of the show.

The show has managed to keep the audience glued and the ratings have been very consistent.

The protagonist Karan Grover told us, "We are very much happy as our show completed one year. Working with Rajshri is always a great pleasure and being a part of the show is a treat for me. The credit of our success goes to the whole team and our dear audience as without their love and support, this achievement would not have been possible".

We contacted Suhasi Goradia aka Swarn Abha of the show who shared, "It has been a wonderful journey with Rajshri and the show. Even today, I am eager and look forward to more achievements when it comes to the show. Usually it becomes monotonous for a lead to do the same show for a long time, but for me I am as enthusiastic and thrilled as I was when I got the role".

Suhasi goes on, "I have never ever seen such a caring production house which takes care of the cast and crew."

Kavita Barjatya, Producer of the show shared her happy moment with TellyBuzz saying, " Yes, our show has completed one year and before I could say anything I would  like to  thank Zee TV as we are maintaining our relationship since long time. It has been great to work with the entire cast and we can feel that happiness on their faces. We hope this sweet bond with channel and cast continues".

shanak.hot 9 years ago it's been an year, wow. congratulations to the whole team

WooHooHaha21 9 years ago ohh wow!!! congosss to the whole of YMGGK cast and crew!! I love this show!! love karan and abha loads!!

Laila2009 9 years ago This show has been able to sustain itself by building a storyline that is beyond the "love story" of the two leading characters. So far it has had some interesting storylines but like all shows, I can see they're running out of these as well and suspect that in six months it will close up shop.

Overall, it is was an entertaining show with some very good peformances by the cast. I enjoyed watching it and it was always rewarded with good ratings.

Best of luck to the people involved.

okbaba 9 years ago congratulations to the whole team...specially to Karan v. Grover.u rock in this show

.LovelyDreamer. 9 years ago Congratz to whole team...My whole family likes to watch YMGGK.... So , I'm also addicted to it...:)

-Punjaban 9 years ago Yes.. i agree..i love it..i watch it everyday when it comes on.. Congrats to the whole team for completing one year!

sweet_angel27 9 years ago I like this show :) its one of the more intresting shows on zee tv

Phones of Deepika, Rakul, Simone & Karishma Seized By The ...
18 hours ago