Rakesh Roshan has roped in Jaideep Sen to direct his home production 'Krazzy 4', but hasn't changed the music composer. As usual brother Rajesh Roshan composes tunes for this film. He has churned out some fantastic compositions in the past, but does not impress with this one.

'Dekhta hai tu kya,' rendered by Sunidhi Chauhan and Kirti Sagathia, is a typical rusty, folk Bollywood number. While there have been a few such numbers that have foun 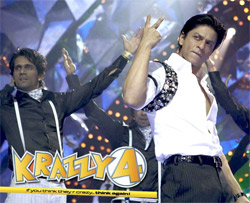 Featured Video
d fans in the audience, yet one can see no such signs in 'Dekhta...' Javed Akhtar has written the rather average lyrics for the tracks.

'Ik rupiya' is not really a sensational song as there is hardly anything musical about it. Being more of a situational number, this piece has been sung by an array of singers, including Labh Janjua, Bhavin Dhanak, Jimmy Moses, Kirti Sagathia, Sudesh Bhonsle and Rahul Vaidya. The number, penned by Javed Akhtar again, can be conveniently skipped.

The National Anthem, 'Jan Gan Man', gets a slot in the album. Ankita Sachdev lends her voice and as much as the song evokes patriotism in listeners, it has nothing new to offer.

The title track, 'Krazzy 4', which was filmed on Shah Rukh Khan, is an item number with all the contemporary Bollywood instruments. The music is as conventional as it can get. While musically, the song isn't much of an achievement, the audiences are likely to enjoy it.

'Break free' bears a resemblance to the title track. The singers and the lyricist are the same and even the composition sounds similar. While the lyrics might have been altered here and there, differentiating between the two is a hard task.

'O re lakad' surprises the same way as 'Dekhta hai tu kya'. It has a rusty touch to it. The song has been sung by Soumya Raoh, Kailash Kher and Neeraj Sridhar, who make an interesting trio but the song isn't much fun as a whole.

Listening to the entire soundtrack of 'Krazzy 4' could turn out to be a little boring or uninteresting. Even though one gets to hear Rajesh Roshan's composition after a hiatus, he doesn't innovate or offer variations in his regular style.

The songs are purely situational and would probably seem better on screen.