Don Anna aka Ashiesh Roy was at the receiving end of Mr. Sharma aka Rajesh Kumar's stingy slaps on the sets of Sab TV and Sitcom Productions' popular comedy show Mrs & Mr Sharma Allahabad wale in due course to improvise the scene and make it look more hilarious. 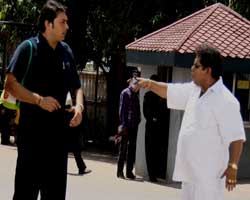 A little birdie informs us, "Last week when the two actors were enacting a scene, Ashiesh Roy cajoled Rajesh Kumar to slap him, but due to constant laughs from the co-actors during the scene they ended doing 17 re-takes and after the final shot Ashiesh's cheeks were red and swollen."

When contacted, Ashiesh Roy with a smile replied, "Firstly it was all part of the scene and result of our improvisation and secondly it was my idea that Rajesh slaps me for real to make it more effective. Also I hadn't anticipated that we would need so many re takes."

For such talented actors just improvisation can't be the reason for so many re-takes. When probed him further he asserted, "Actually another reason for 17 re-takes was during the shot first Divyanka, then Rajesh and then someone or the other would burst out laughing and with no choice we had to do it again."

Though that experience was not fun, our source adds that, "The scene turned out to be good and at the end of the day Rajesh Kumar rewarded Ashiesh Roy with a big chocolate!"

I m sorry for that guy...haha

.Angel 10 years ago at least it was a happy slap

nice entertainment on the sets..!!

Don_mafia 11 years ago sharman should be given da role again instead of talpade...talpade couldnt handle da role ..dude...
sharman is awesome for da role LAXMAN...he was great in golmaal.....

radhika_21 11 years ago well its gr8 that they both will be in the third movie!
thanx!

4rosegirl1 11 years ago sharman is much better than this talpade guy. i want him back innt he sequel.

I luv Shamit 11 years ago Thanks!
Yeah i missed Sharman a LOT! :(

Ashalata Wabgaokar passes away due to COVID-19
31 minutes ago

Zarina Wahab was Tested Positive for COVID-19; Actress ...
41 minutes ago