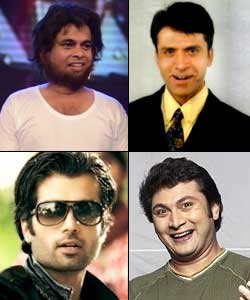 After the replacements of Aashka Goradia and Sudesh Lahiri with Sucheta Khanna and Sudesh Bhonsle respectively, Star Plus and Reliance Big Productions' Comedy Ka Maha Muqabla are bringing in few more forced replacements...

As per the latest, we hear that Arhaan Behll who plays the protagonist Krishna in Star Plus' Pratigya will no more be part of the show!! He is now being replaced by talented artist Rajesh Kumar. Arhaan was part of Shreyas Chi Mandli team. Another change that will be seen in the coming episodes is that Ishtiyaak who was part of Shekhar Ke Movers will make way for Suraj Thapar.

Our source states, "Arhaan Behll could not continue to be part of the show, as he could not space it out properly between his fiction show and the reality. He has been shooting non-stop for long hours for Pratigya, and this meant that he did not have time to rehearse for Comedy Ka Maha Muqabla. Going by Arhaan's popularity, he could not even be side-lined with less dialogues in the reality show. Arhaan tried his best to work out his timings, but he could not do so. A mutual decision has been taken between him and the production house now, and he will not be part of the show anymore".

"The format of the show is being modified from the 9th episode onwards. A particular theme will be given to all the teams, and that given theme will be a permanent one and every team needs to bring in variations within the set theme", adds our source.

Talking about the reason for Ishtiyak being replaced, our source informs us, "Ishtiyak could not bring in variations in his act. As per the new concept of the show, we needed contestants who can be more versatile who are good at acting, singing as well as mimicry. Considering all this, Sooraj Thapar has been brought in place of Ishtiyak".

When contacted, Rajesh Kumar of Sarabhai V/s Sarabhai fame confirmed his presence in the show and said, "Yes, I have stepped into Comedy Ka Maha Muqabla. Talks were on for the past few days, and things got finalized last night. I have started rehearsing for the show, I will be seen in Shreyas Chi Mandali. Hope viewers love me in this show".

We tried hard to reach Arhaan Behll and even sent his a text message, but he remained unavailable..

When contacted, Sooraj Thapar who is seen in Imagine's Chandragupta Maurya and Star Plus' Sasural Genda Phool said, "It is true that talks are on. But I have not yet signed the contract".

These changes will be seen in the 9th episode of the show...

Well, let's hope this marks the end of replacements in the big ticket reality show...

coolfattin 9 years ago I was waitin to c mor of u CKMM..
but i think its ok..
Keep rockin in MKAP....

Elvira22 9 years ago U r THE BEST Arhaan .... good decision ... v all loveuuuuuuuuuuu

Rhea Sharma to be seen in Ekta Kapoor's next?
29 minutes ago