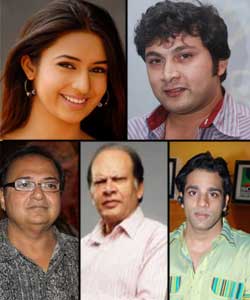 Rajesh Kumar and Divyanka Tripathy came together as the lead pair of SAB TV's Mrs. & Mr. Sharma Allahabad wale and exhibited scintillating on screen chemistry. Now the pair is back again in a new avatar and a brand new show to give the audience a simple and comic love story.

TellyBuzz had earlier reported about Rajesh Kumar turning Producer with a show on SAB TV, and that the show is to be co-produced by Hats Off Production.

TellyBuzz has yet again come up with exclusive information on the story and cast of the show.

A little birdie tells us, "The show, tentatively titled 'Chintu Chinki Aur Ek Badi Si Love Story' will be the tale of two Lucknow based families. There is a lot of friction between the boy and the girl of these families, which blossoms into love later on".

"Rajesh Kumar and Divyanka Tripathy play the leads. Veteran actor S.M.Zaheer will play grandfather to the male lead, while Rakesh Bedi has been roped in to essay the role of Jagat Mama, an authoritative character who knows the male lead's family. Abhishek Awasthi who was earlier part of the SAB family with Jugni Chali Jalandhar will play the parallel lead, and close friend of the male lead who will help him out in getting the girl he loves".

When contacted, S.M.Zaheer confirmed that he is part of the show, but asked us to call later.

Rakesh Bedi told us, "I play a very interesting character who has a solution to everything".

Abhishek Awasthi too confirmed his presence in the show.

We could not get through to Rajesh Kumar and Divyanka.

We hear that the team is all set to shoot the promo on the 26th of this month after which the regular shoot will begin. The show is expected to launch in mid August.

Divyanka Tripathi reveals she once quit a TV show despite having no ...

+ 5
9 years ago Good. But I wish she were back with Sharad. I can't tolerate her anymore with anyone else Sharad.
Sharad, where are you? Can't you see her alone????? Do come with her.
Anyways, best of luck Diva.

+ 6
9 years ago thats good. Wish Divyanka All the best for this Show

+ 3
9 years ago wow great! super excited for divyanka's comeback! but i wish if it wont be a comedy again! anyways np! still m gonna watch for divyanka! ;)

+ 3
9 years ago I love Divyanka and all but please no more comedies!
"exhibited scintillating on screen chemistry." Haaa! I think not!!